The Only Filipino Nurse to Pass Japan’s Nursing Exam 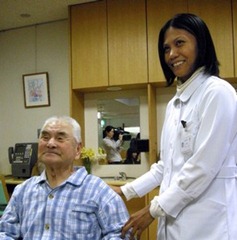 Nurse Ever Lalin (R) from the Philippines  smiles with a Japanese patient at the Ashikaga Red Cross hospital in Ashikaga in Tochigi prefecture on March 26, 2010 after she passed Japan’s national nursing examination. Three foreign nurses, two Indonesians and one Filipino, passed the Japanese nursing exam to become the first successful cases under Japan’s controversial efforts to invite Asian nurses to work under free trade agreements.

Ever Lalin, like others in the first batch of 98 nurses and caregivers who went to Japan May last year for a training stint preparatory to taking the Japanese nursing licensure exam, had no prior lessons in the Niponggo language.