Preeclampsia is a characterized, by vsospasms, changes in the coagulation system, and disturbances in systems related to volume and BP control. Vasospasms results from an increased sensitivity to circulating pressors, such as angiotensin II, and possibly an imbalance between the prostaglandins prostacyclin and thromboxane A1.

Endothelial cell dysfunction, believed to result from decreased placental perfusion, may account for many changes in preeclampsia. Arteriolar vasospasm may cause endothelial damage and contribute to an increased capillary permeability. This increase edema and further decreases intravascular volume, predisposing the woman with preeclampsia to pulmonary edema. 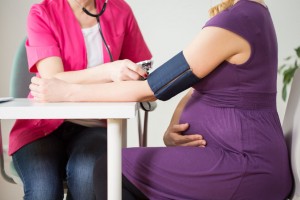 Immunologic factors may play an important role in the development of preeclampsia. The presence of a foreign protein, the placenta, or the fetus maybe perceived by the mother’s immune system as an antigen. This may then trigger an abnormal immunologic response. This theory is supported by the increased incidence of preeclampsia or eclampsia in first-time mothers or to multiparous woman pregnant by a new partner. Preeclampsia maybe an immune complex disease in which the maternal antibody system is overwhelmed from excessive fetal antigens in the maternal circulation. This theory seems compatible with the high incidence of preeclampsia among women exposed to a large mass of trophoblastic tissue as seen in twin pregnancies or hydatidiform moles.

Genetic predisposition maybe another immunologic factor. Dekker reported a greater frequency of preeclampsia and eclampsia among daughters and granddaughters of women with a history of eclampsia, which suggests an autosomal recessive gene controlling the maternal immune response. Paternal factors are also examined.

Diets in inadequate nutrients, especially protein, calcium, sodium, magnesium, and vitamin E and C, maybe an etiologic factor in preeclampsia. Some practitioners prescribed high-protein diets (90 mg supplemental protein) without caloric restriction and moderate sodium intake in the prevention and treatment of this disorder. However, data are limited regarding the association between diet and preeclampsia.

Preeclampsia progress along a continuum from mild disease to severe preeclampsia, HELLP syndrome, or eclampsia. The pathophysiology of preeclampsia reflects alteration in the normal adaptations of pregnancy. Normal physiologic adaptations to pregnancy include increase blood plasma volume, vasodilation, and decreased systemic vascular resistance, elevated cardiac output, and decreased colloid osmotic pressure. Pathologic changes in the endothelial cells of the glomeruli are uniquely characteristic of preeclampsia, particularly in nulliparous women. The main pathogenic factor is not an increase in BP but poor perfusion as a result vasospasm. Arteriolar vasospasm diminishes the diameter of blood vessels, which impedes blood flow to all organs and raises BP. Function in organs such as the placenta, kidneys, liver and brain is deceased by as much as 40% to 60%.