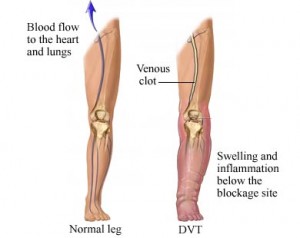 Deep Vein Thrombosis (DVT) is a condition wherein a blood clot or thrombus is formed in a deep vein. It can also be called venous thrombosis, thrombophlebitis, phlebothrombosis.

The body is composed of superficial veins, deep veins and perforating veins. Perforating veins are the kind of veins that permit one – way flow of blood from the superficial to the deep vein system. On the other hand, superficial veins are made of thick – walled muscles and lie just beneath the skin. Deep veins however, are made of thin – walled muscle media. Both superficial and deep vein have valves that allows unidirectional flow of blood to and back the heart. The valve is situated along the vein’s base segment and extends into a sinus. With these structural arrangements, the valves readily open and close without coming in contact with the vein walls, it also permits rapid closure when the blood flows backward, preventing regurgitation.

There is generally an unknown etiology regarding how DVT is formed, factors however, like the Virchow’s triad, were attributed to having DVT. The Virchow’s triad are: venous stasis, vessel wall injury and altered blood coagulation. For a DVT to occur, at least two among the triad should be presented by the patient.

The triad would cause inflammation of the vein walls or what we call thrombophlebitis, this would be eventually lead to thrombus formation. In cases where no inflammation occurs, thrombus is formed through phlebothrombosis.

Venous thrombi are accumulation of platelets (in response to the inflammation); and are attached to the vein wall and contains a tail- like attachment made of WBC, RBC and fibrin. This tail can grow or can spread in the direction of blood flow as layers of clot are formed through time. This could be critical since some parts of the clot may break off, travel in the blood stream and occlude other veins.

Development of DVT may cause physical manifestations but are generally non – specific. Deep vein obstruction would present through edema, tenderness (Homan’s sign: pain in the calf after the foot is sharply dorsiflexed) and swelling of the affected extremity. Superficial vein obstruction on the other hand causes pain, tenderness, redness and warmth.