When cyst is swallowed, it passes through the stomach unharmed and shows no activity while in an acidic environment. When it reaches the alkaline medium of the intestine, the metacyst begins to move within the cyst wall, which rapidly weakens and tears. The quadrinucleate amoeba emerges and divides into amebulas that are swept down into the cecum. This is the first opportunity of the organism to colonize, and its success depends on one or more metacystic trophozoites making contact with the mucosa.

Mature cyst in the large intestines leaves the host in great numbers (the host remains asymptomatic). The cyst can remain viable and infective in moist and cool environment for at least 12 days, and in water for 30 days. The cysts are resistant to levels of chlorine normally used for water purification. They are rapidly killed by purification, desiccation and temperatures below 5 and above 40 degrees. 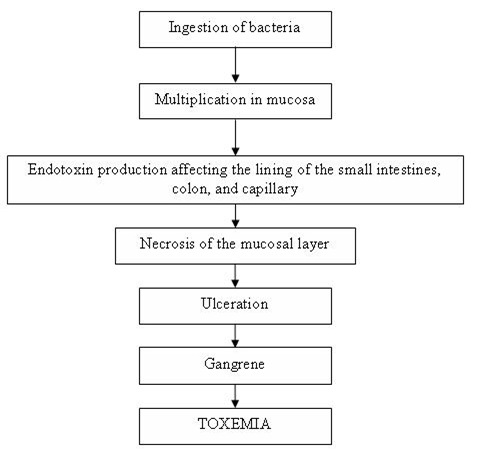 The metacystic trophozoites of their progenies reach the cecum and those that come in contact with the oral mucosa penetrate or invade the epithelium by lytic digestion.

The trophozoites burrow deeper with tendency to spread laterally or continue the lysis of cells until they reach the sub-mucosa forming flash-shape ulcers. There may be several points of penetration.

From the primary site of invasion, secondary lesions maybe produced at the lower level of the large intestine.

Progenies of the initial colonies are squeezed out to the lower portion of the bowel and thus, have the opportunity to invade and produce additional ulcers. Eventually, the whole colon may be involved.

E. histolytica has been demonstrated in practically every soft organ of the body.

Trophozoites which reach the muscularis mucosa frequently erode the lymphatics or walls of the mesenteric venules in the floor of the ulcers, and are carried to the intrahepatic portal vein.

If thrombi occur in the small branches of the portal veins, the trophozoites in thrombi cause lytic necrosis on the wall of the vessels and digest a pathway into the lobules.

The colonies increase in size and develop into abscess.

A typical liver abscess develops and consists of:

Next to the liver, the organ which is the frequent site of extra-intestinal amoebiasis is the lungs. This commonly develops as an extension of the hepatic abscess.