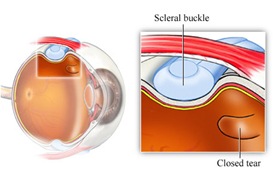 Photocoagulation, in which a laser or xenon are “spot welds” the retina to the pigment epithelium.

b. Electrodiathermy, in which a tiny hole is made in the sclera to drain subretinal fluid, allowing the pigment epithelium to adhere to the retina.

c. Cryosurgery or retinal cryopexy, another “spot weld” technique that uses a super cooled probe to adhere the pigment epithelium to the retina.

d.  Scleral buckling, in which the sclera is shortened to force the pigment epithelium closer to the retina; commonly accompanied by vitrectomy.

1. Prepare the patient for surgery.

3. Encourage ambulation and independence as tolerated.

4. Administer medication for pain, nausea, and vomiting as directed.

5. Provide quiet diversional activities, such as listening to a radio or audio books.

7. Advise patient to avoid rapid eye movements for several weeks as well as straining or bending the head below the waist.

8. Advise patient that driving is restricted until cleared by ophthalmologist.

9. Teach the patient to recognize and immediately  report symptoms that indicate recurring detachment, such as floating spots, flashing lights, and progressive shadows.