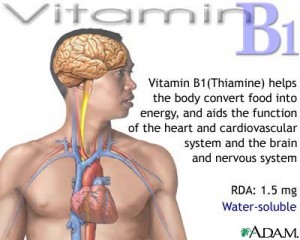 Wernicke’s encephalopathy is a serious neurological condition that results primarily from a deficiency of the nutrient thiamine which is also known as Vitamin B1. This condition is an inflammatory, hemorrhagic, degenerative condition of the brain. It is characterized by lesions in several parts of the brain, including the hypothalamus, mammillary bodies, and tissues surrounding the ventricles and aqueducts, double vision, ophthalmoplegia, involuntary and rapid movements of the eyes, lack of muscular coordination, and decreased mental function, which may be mild or severe. The disease is comprised of three main symptoms: mental confusion, lack of muscle coordination, and a paralysis of the muscles which control eye movements.