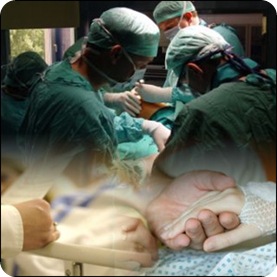 1. Shock – It can be often prevented by attention to fluid balance and the administration of blood or blood substitutes during and after surgery. There are several causes of shock, although it usually occurs as the result of a combination of two or more factors.

1. Hematogenic – cause by blood loss

2. Neurogenic – caused by vasodilatation and reflex inhibition of the heart brought about by an insult to the nervous system.

3. Cardiogenic – results from cardiac failure or an interference with heart functions and in myocardial infarction or coronary thrombosis.

4. Vasogenic – caused by diffuse vasodilation; blood circulates poorly through dilated vessels and is not as available to the vital centers (pools in the small vessels and viscera); may occur in anaphylaxis

5. Toxic or bacteremic – thought to be cause by toxic fact that enters the bloodstream from infection

Signs and Symptoms of Shock:

o The person in shock appears nervous and apprehensive at first, but later become apathetic.

o The skin is cold and moist, and the lips are somewhat cyanotic.

o The pulse is rapid and thready, respirations are rapid and shallow, and the temperature subnormal.

o Treatment of shock, defends on the type of shock and the cause.

o The primary treatment of hematogenic shock is restoration of blood volume.

o Primary treatments for other types of shock might include the following:

1. Checking of the airway and the administration of oxygen,

2. Checking or changing the patient’s position to relieve pain or assist the airway.

3. Attention to urinary volume and medication.

o Some of the drugs commonly used to treat shock are:

When signs and symptoms of shocks are noted immediately and treatment is initiated promptly, recovery is usually rapid. The prognosis becomes more guarded if treatment is delayed. Therefore prompt and intelligent recognition of the early manifestations of shock is important.

o The patient is apprehensive, restless and thirsty.

o The skin is cold, moist and pale; his temperature falls.

o As hemorrhaging continues the blood pressure continues to fall, and the patient’s lips and conjunctivae become pallid.

o He will see spots before his eyes and hear ringing in his ears.

o The patient is weak but conscious.

o The surgeon must be notified immediately and emergency measures are instituted until he arrives.

o The patient should be given oxygen, and the rate of intravenous drip should be increased.

o His feet should be elevated, if possible.

a. Injury to the vein by tight straps or leg holders at the time of surgery.

b. Blanket roll under the knees.

c. Concentration of blood by loss of fluid or dehydration.

d. Slowing of the blood flow in the extremity due to a lowered metabolism and depression of the circulation after operation.

Signs and Symptoms of phlebitis or thrombosis:

o The primary symptom of phlebitis or thrombosis is pain in the calf of the leg with swelling occurring within 1 to 2 days.

o The patient often ha a slight fever, sometimes with chills and sweat.

Treatment of phlebitis or thrombosis:

o The best treatment of femoral phlebitis or thrombosis is prevention. This is done by administration of adequate fluids after surgery to prevent concentration of blood, leg exercise and bandaging the legs with elastic bandages or antiembolic stockings as necessary.

o Blanket rolls or pillow rolls should not be placed under the knees.

o Early ambulation is also important in preventing phlebitis and thrombosis because it prevents the stagnation of blood in the veins of the lower extremities.

o Active treatment of phlebitis or thrombosis includes ligature or removal of the affected veins and the administration of heparin.

Pulmonary complications are the most serious and most common post-operative complications. They may be avoided in large measure by careful preoperative observation and teaching and by taking every precaution during and after surgery.

Predisposing causes of pulmonary complications include:

o Infections of the mouth, nose and throat.

o Irritating effect of the anesthetic, especially either on the respiratory mucous membranes, with a resultant increase in mucus secretion

o Shallow respirations after the operation because of the pain.

1. Atelectasis – when the mucous plug closes one of the bronchi entirely, there is a collapse of the pulmonary tissue beyond the point.

Signs and Symptoms of Atelectasis:

If the lung tissue is involved, the patient will demonstrate the following:

o Treatment involved removal of fluid or air by needle aspiration and sedation.

o Other pulmonary complications that may occur later in the postoperative period are bronchitis, pneumonia, hypostatic pulmonary congestion, pleurisy, and pulmonary embolism.

1. Urinary Retention may occur following any operation, but it occurs most frequently after operations on the rectum, anus, vagina or lower abdomen. The cause is thought to be a spasm of the bladder sphincter. Treatment depends on the individual patient but may include diuretics or increasing intravenous fluids.

2. Urinary In continence – is a frequent complication in the aged.