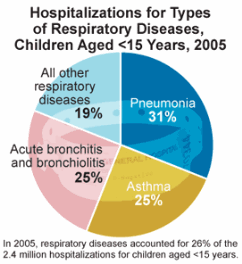 Respiratory diseases are diseases that affect the air passages, including the nasal passages, the bronchi and the lungs. They range from acute infections, such as pneumonia and bronchitis, to chronic conditions such as asthma and chronic obstructive pulmonary disease. These include diseases of the lung, pleural cavity, bronchial tubes, trachea, upper respiratory tract and of the nerves and muscles of breathing.

Respiratory diseases can be classified in many different ways

A. Obstructive lung diseases – are diseases of the lung where the bronchial tubes become narrowed making it hard to move air in and especially out of the lung.

F. Respiratory  Tumors – Tumours of the respiratory system are either malignant or benign.

The major types of respiratory system cancer are:

In addition, since many cancers spread via the bloodstream and the entire cardiac output passes through the lungs, it common for cancer metastases to occur the lung. Breast cancer may invade directly through local spread, and through lymph node metastases. After metastasis to the liver, colon cancer frequently metastasizes to the lung. Prostate cancer, germ cell cancer and renal cell carcinoma may also metastasize to the lung.

Treatment of respiratory system cancer depends on the type of cancer. Surgery (usually removal of part of the lung, a lobectomy or an entire lung, a pneumonectomy), chemotherapy and radiotherapy are all used. The chance of surviving lung cancer depends on the cancer stage at the time the cancer is diagnosed and is only about 14-17% overall. In the case of metastases to the lung, treatment can occasionally be curative but only in certain, rare circumstances.

G. Pleural cavity diseases -  diseases include empyema and mesothelioma which are mentioned above.

I. Disorders of breathing mechanics

Obesity is often associated with sleep apnea and can cause either an obstructive or a restrictive pattern on spirometry. Obesity reduces the movement of the chest wall which can, in extreme cases, result in the obesity-hypoventilation syndrome, a cause of respiratory failure.