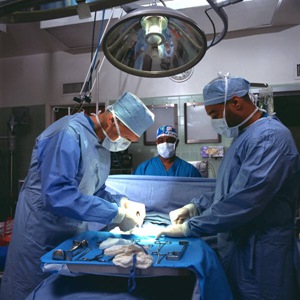 Surgery is a medical technology consisting of a physical intervention on tissues. As a general rule, a procedure is considered surgical when it involves cutting of a patient’s tissues or closure of a previously sustained wound. Other procedures that do not necessarily fall under this rubric, such as angioplasty or endoscopy, may be considered surgery if they involve “common” surgical procedure or settings, such as use of a sterile environment, anesthesia, antiseptic conditions, typical surgical instruments, and suturing or stapling. All forms of surgery are considered invasive procedures; so-called “noninvasive surgery” usually refers to an excision that does not penetrate the structure being excised (i.e. laser ablation of the cornea) or to a radiosurgical procedure (i.e. irradiation of a tumor).

Surgery is a unique experience of a planned physical alteration encompassing three phases: PREOPERATIVE, INTRAOPERATIVE AND POSTOPERATIVE. These 3 phases are together referred to as the PERIOERATIVE PERIOD.

Surgical procedures are commonly grouped according to:

B. Degree of Urgency

The degree of risk involved in a surgical procedure is affected by the client’s age, general health, nutritional status, use of medications, and mental status.