Stomach cancer can develop in any part of the stomach and spread to other organs. It usually begins in cells in the 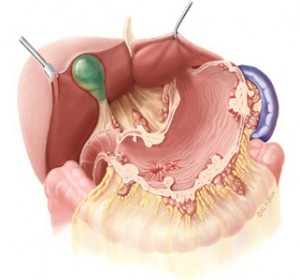 inner layer of the stomach. Over time, the cancer may invade more deeply into the stomach wall. A stomach tumor can grow through the stomach’s outer layer into nearby organs, such as the liver, pancreas, esophagus, or intestine. Stomach cancer cells can spread by breaking away from the original tumor. They enter blood vessels or lymph vessels, which branch into all the tissues of the body. The cancer cells may be found in lymph nodes near the stomach. The cancer cells may attach to other tissues and grow to form new tumors that may damage those tissues.

H. pylori is a bacterium that commonly infects the inner lining of the stomach, thereby causing stomach inflammation and peptic ulcers. It also increases the risk of stomach cancer, but only a small number of infected people develop stomach cancer.

Heavy smokers are most at risk.

People who highly consume foods that are smoked, salted, or pickled have an increased risk for stomach cancer. On the other hand, people who eat a diet high in fresh fruits and vegetables may have a lower risk of this disease. Lack of exercise and obesity are often linked with most cancers.

The doctor feels the abdomen for fluid, swelling, or other changes. He will also check for swollen lymph nodes.

Direct visualization of the stomach through a lighted tube (endoscope).  The tube is passed through your mouth and esophagus to the stomach.

An endoscope has a tool for removing tissue. The doctor uses the endoscope to remove tissue from the stomach. A pathologist checks the tissue under a microscope for cancer cells. A biopsy is the only sure way to know if cancer cells are present.

When stomach cancer spreads, cancer cells may be found in nearby lymph nodes, the liver, the pancreas, esophagus, intestine, or other organs. The following tests may be ordered:

Treatment of stomach cancer depends on the size, location, and extent of the tumor, the stage of the disease, and the health of the patient. It may involve surgery, chemotherapy, or radiation therapy. A combination of these treatments may also be done.

The type of surgery for stomach cancer depends mainly on where the cancer is located. The surgeon may remove the whole stomach or only the part that has the cancer.

Chemotherapy uses drugs to kill cancer cells. It may be given before or after surgery. After surgery, radiation therapy may be given along with chemotherapy. The drugs that treat stomach cancer are usually given intravenously.

The side effects depend mainly on which drugs are given and how much. Chemotherapy kills fast-growing cancer cells, but the drugs can also harm normal cells that divide rapidly.

Radiation therapy uses high-energy rays to kill cancer cells. It affects cells only in the part of the body that is treated. Radiation therapy is usually given with chemotherapy to treat stomach cancer. Treatments are usually 5 days a week for several weeks. Side effects depend mainly on the dose and type of radiation.