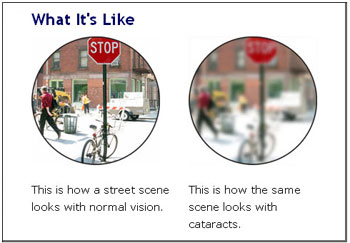 Senile cataract happens at anytime. It is a progressing impairment of the lens function. As the lens thickens, instead of transparent nature, it becomes whitish and the opacity of the lens makes it impossible to perceive visual acuity. If only detected earlier this can be corrected with the latest advancement in ophthalmology.

A theory implies that cataracts would appear as people age. That is why it is called senile since it was believed to be an age-related eye disease. As the body ages, so as the parts like the lens. The lens tends to be white opaque as the cells in the lens degenerate. The lens may also lack hydration that is why the lens is not that transparent as before.

A survey was done on how senile cataract affects people. People coming from Africa are victims of cataract. The incidence increases with age starting between 30 years old to 70 years old.  It has been found that age is a risk factor. People in majority would develop cataract in 45 years olds up to 64 years old. If left untreated, senile cataracts can pose a danger on the patient such as being prone o accidents and glaucoma. Both males and females are also probable in acquiring senile cataract. Any previous eye injury would also be a determining factor for senile cataracts.