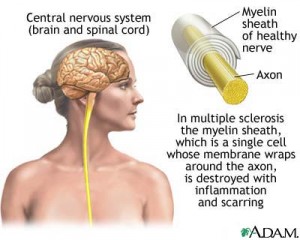 Multiple Sclerosis is a chronic yet progressive degenerative disease of the central nervous system. It is non-contagious however very damaging for the individual. The breakdown of the myelin or termed as demyelination makes the nerve cells unable to conduct electrical impulse thus making the muscles weak. This process affects the white matter of the central nervous system. As the condition takes its course, patients may suffer from difficulty in acquiring normal vision, disturbance in speech, as well as in their penmanship.

The existence of multiple sclerosis in the early adult life may be related to autoimmunity. Most the cases are recorded to be occurring in colder climate, common to age groups between 20 years old to 40 years old. The whole course of the disease may last between 10 to 20 years. As it is more apparent in colder areas, in United States for instance, approximately 350,000 were found out to have multiple sclerosis. Most of the known cases are Caucasians.