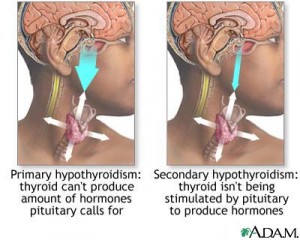 The most common cause of a hypothyroid state is the presence of an autoimmune disease. The major hormone released by the thyroid gland is called thyroxine (T4). Normally, the thyroid gland releases 5-12 mcg/dl or 65-154 nmol/L of thyroxine (T4) in a daily basis. The half-life of T4 is roughly 7-10 days. Triiodothyronine (T3), the second thyroid hormone, is released in smaller amounts.

In the early stage of the disorder, the hypothalamus triggers a massive release of thyrotropic-releasing hormone (TRH) as a compensatory mechanism for thyroid hormone deficiency. TRH is the one responsible for stimulation of the anterior pituitary gland to release thyroid-stimulating hormone (TSH), also called thyrotropin. The TSH then binds with the follicular cells in the thyroid gland to activate the release of the stored thyroid hormones (T3 and T4) to tissues. Hypofunctioning of the thyroid glands leaves the TSH unused and the APG continually releasing it due to hypothalamic stimulation. As a result hypertrophy of the thyroid gland (goiter) occurs.

Thyroid hormones are the body’ major metabolic. They are primarily responsible for cellular metabolism affecting all cells in the body. Reduction of its level poses extensive and systemic effects categorized into:

These include delay or cessation of cognitive and physical development due to derangement of cellular and basal metabolism. Declining metabolic rate will result to sluggish and weaker muscular movements.  Lesser generation of body heat (lowering of body temperature) is also noted that leads to cold intolerance of affected individuals.

The accumulation of mucopolysaccharides in the subcutaneous and interstitial tissues (myxedema) results to signs and symptoms directly related to the organ affected.

In myxedema, edematous engorgement is noted around the lips, fingers and periorbital areas. In severe and untreated cases, the affected individual may lapse to a coma, which can be deadly.