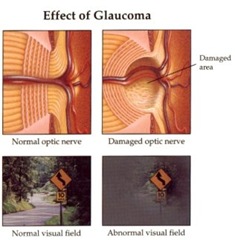 2. In chronic glaucoma, a combination of miotic agent and carbonic anhydrase inhibitor is usually given.

a. Peripheral iridectomy – Small portion of the iris excised so aqueous humor can bypass pupil.

b. Trabeculectomy – part of trabecular meshwork and iris removed.

c. Laser iridectomy –  creates multiple incisions in the iris to create openings for aqueous to flow.

3. Types of surgery for chronic glaucoma include:

b. Iridencleisis – opening between anterior chamber and conjunctiva to bypass blocked meshwork and allow aqueous humor to be absorbed into conjunctival tissues.

d. Corneoscleral trephine (rarely done) – a permanent drainage  opening is made at the junction of the cornea and sclera through the anterior chamber.