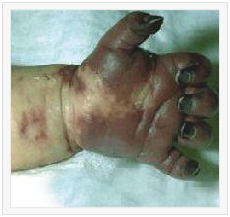 Disseminated intravascular coagulation (DIC) is a condition in which blood clots form throughout the body’s small blood vessels. It is an acquired disorder of blood clotting that result from excessive trauma or similar underlying stimulus. These blood clots can reduce or block blood flow through the blood vessels, which can damage the body’s organs.

Normal blood clotting is a balance between the clotting or hemostatic system and the fibrinolytic or the dissolving system of the bloodstream. When a blood vessel is injured, excessive blood loss is prevented by rapid occurrence of local vasoconstriction at the site of trauma or injury. As the vessel wall is torn, collagen located beneath the skin is released and exposed. As a result, platelets swell and become adherent and are irregularly shaped.

Adenosine diphosphate is then released and attracts additional platelets and binds these platelets together, a process known as platelet aggregation. A platelet plug then seals the injured vessel as a result of the aggregation. To prevent blood from passing through the platelet plug, it is strengthened by fibrin threads. This is how blood clotting occurs.

However, to prevent too much clotting, a proteolytic enzyme formed from plasminogen known as plasmin or fibrinolysin digests the fibrin threads that are present. This causes the lysis of the clot along with consumption of blood clotting factors. The fibrin degradation products prevent the production of more fibrin and platelet aggregation, thus normal blood clotting occurs.

In summary, normal blood clotting occurs as a result of the balance between the clotting and dissolving system. Too much hemostatic system would pose negative effects to the body. Excessive fibrinolytic activity taking place in a human body would also result to massive blood loss.

In disseminated intravascular coagulation (DIC), there is an imbalance between the clotting and the dissolving activities. Extreme clotting takes place because of a damage that begins at one point in the circulatory system. This damage depletes the availability of the clotting factors such as the platelets and fibrin from the general circulation.