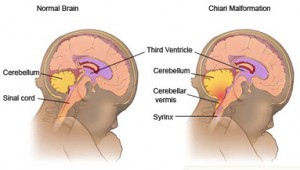 Arnold-Chiari Malformations are rare diseases that denote to a spectrum of congenital malformation of the brain. It is often called Chiari Malformation or tonsillar herniation. In this disorder, congenital hindbrain abnormalities are present that affects the structural relationships between the cerebellum, brainstem, the upper cervical cord and the bony cranial bone.