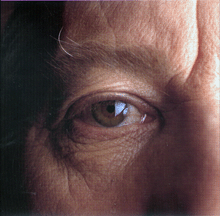 Age-related macular degeneration or AMD is one of the leading culprits to experiencing vision loss and blindness among Americans aging 65 years and above. Since the elderly population is largely increasing in the general population, vision problems caused by AMD are a growing too. In this disease sharp, central vision is destroyed gradually with aging. A central vision is needed by people to see objects clearly. Sharpness of this vision is necessary to perform activities such as reading and driving. This is the main reason why problems in carrying out daily tasks usually cause frustration among affected individuals.

In AMD, the macula, part of the eye that allows a person to see things in detail, undergoes through a degenerative process. As estimated, about 1.75 million of US residents currently are suffering from this condition in advanced form. The digits are expected to rise by almost 3 million in 2020.

What are the symptoms of AMD?

The progression of the symptoms may vary among individuals. Some may notice a slow process while others are taken aback by how fast the vision loss takes place. One thing about this disease is the fact that it causes no pain. Early sign of AMD include a distorted vision which may be described as seeing shadowy areas in the ventral vision. In rare situations, the vision loss may be abrupt.

To tell if a person is experiencing AMD, an Amsler Grid may be used. Using this chart with black lines which are arranged in a graph pattern, vision problems is identified as it measures the central vision of an individual.

AMD is possible to detect before the symptoms take place. A retinal exam can detect the barely noticeable early signs of AMD.

This test is used to check the blood vessels surrounding the macula for problems. It is usually performed when central vision defects are identified by the doctor.

Although AMD has been linked to age, research suggests a hereditary component of the condition. This is based on a research conducted at the Duke University where a strong association between AMD and presence of variant gene (complement Factor H) is discovered. About half of AMD cases are genetically determined.

In addition, the Opthalmology Clinics of North America reported another cause of AMD. According to the report in December 2003, deprivation of oxygen in the retina can stimulate ‘neorevascularization’ which usually accompanies wet AMD. The process of neorevascularization activates due to the presence of vascular endothelial growth factor (VEGF), a form of protein. Treatments for AMD have been focused on targeting this protein.

Currently there is no outright cure for the condition. However, some treatments may be performed to delay disease progression.