Tay-Sach’s disease (TSD), also known as Hexosaminidase A Deficiency or GM2 gangliosidosis, is a rare inherited metabolic disorder. In this disorder the affected person’s body is unable to metabolize lipids that results to its accumulation in the tissues and nerve cells of the brain.

Tay-Sach’s disease (TSD) is an inherited disorder that follows an autosomal recessive pattern.

If both parents are carriers (mother and father), the following probability of disorder incidence will occur:

If either the mother or the father is the carrier, any of their children will not have the Tay-Sach’s disease but will be carrier.

Hexosaminidase A is an enzyme necessary for lipid metabolism. This enzyme catalyzes the biodegradation of acidic fatty materials known as gangliosides. Absence of Hexosaminidase A results to accumulation of ganglioside GM2 into the tissues and nerve cells leading to cognitive challenge due to buildup on brain cells and blindness due to deposits on optic nerve cells.

Neonates with Tay-Sach’s disease develop normally for the first 3 to 6 months of life. As nerve cells swell up with buildup of gangliosides, a persistent mental and physical deterioration occurs. Progressively, the baby will lose the ability to see, hear and move. Muscle atrophy will begin leading to inability to swallow and later paralysis. A red spot at the back of the child’s eye will develop.  Most children die of pneumonia and cachexia (malnutrition) by age 3 to 5 years.

This is an extremely rare type of TSD. In Juvenile TSD, the signs and symptoms are observed between 2 to 10 years. Cognitive, motor, speech difficulties (dysarthria), difficulty swallowing (Dysphagia), unsteady gait (ataxia) and spasticity are observed in affected children. The disease progresses more slowly but death usually occurs by the time the child is 5 to 15 years of age.

Late Onset TSD (LOTS) occurs in patients between 20 to 30 years of age. This is a rare form of TSD that is frequently misdiagnosed and more often non-fatal. It is characterized by an unsteady gait (ataxia) and a progressive neurological deterioration. 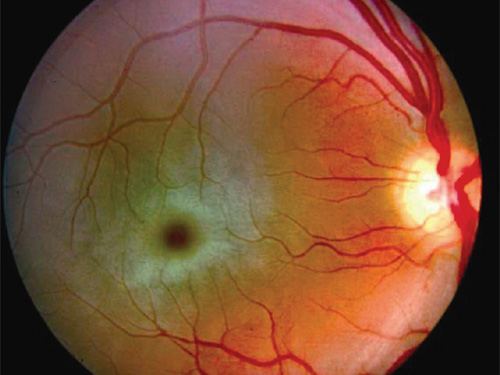 cherry red macula at the eye of a child with TSD

By 2 years or more

There is no cure for Tay-Sach’s disease, however physicians may prescribe medications to relieve pain, manage seizures, and control muscle spasticity.