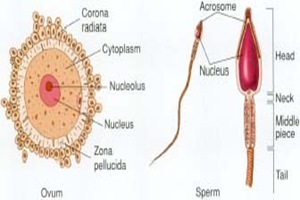 The sperm cell has three parts: a head that contain the chromatin materials, a neck or mid-piece that provides energy for movement, and a tail that is responsible for it’s mobility. The sperm cell has a lifespan of 48 to 72 hours or 3 to 4 days after ejaculation. The sperm must be in the genital tract 4-6 hours before they are able to fertilize an ovum to give time for the enzyme hyaluronidase to be activated. There are two kinds of sperm cell: 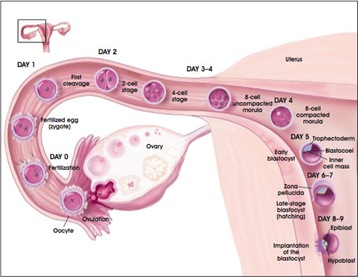 Within a few hours after fertilization, after the nucleus of the sperm has united with the nucleus of the egg, the result of their union, the zygote, begins a process of internal division. First, it divides into two cells, then four, eight, sixteen, and so on, doubling the number with each new division. This process of cell division or cleavage in the zygote is called segmentation. It transforms the zygote into a cluster of cells called morula which, seen through a microscope, resembles a mulberry. The morula slowly moves down the Fallopian tubes toward the uterus, where it arrives after about three days. By this time, it has developed into a hollow ball of cells called blastocyst.