The first two weeks after conception is called the preembryonic period. By the fourth day after conception takes place, the fertilized ovum is now called zygote. This structure is the one that enters to the uterus. The zygote undergoes cell division that divides into 2, then 4 then 8 cells and so on. The cells become tightly compacted with each division until the 16-cell stage where they occupy the same amount of space as the original zygote. When 12-16 cells are present, the zygote is then called the morula.

The outer cells of the morula (termed as morula because it resembles a mulberry) secrete fluid which forms a balstocyst. A blastocyst is a sac of cells within an inner cell mass placed off within the sac. The inner cell mass develops into the fetus. The outer cell layer develops as the placenta and the fetal membranes. 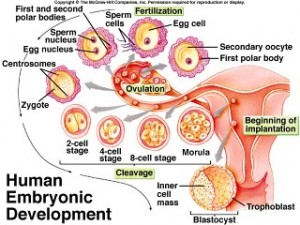 When the blastocyst contains 100 cells it now enters the uterus. However, implantation does not take place immediately as the blastocyst lingers in the uterus for another 2 to 4 days. During this period, the endometrium is now termed as decidua. The endometrial glands are secreting at their maximum at this time. This is to provide rich fluids to nourish the conceptus before placental circulation is established.

Implantation, also called nidation, is the gradual process that occurs between the sixth and the tenth day after conception takes place. During this lengthy process, the embryonic structures continue to develop.

Successful implantation and survival of the conceptus would be possible when a continuing supply of estrogen and progesterone is present. To signal the woman’s body that pregnancy has begun, the zygote secretes human chorionic gonadotropin (hCG). The production of hCG by the conception results to the continuous and persistent secretion of estrogen and progesterone by the corpus luteum until the placenta takes over this function at about 8 weeks age of gestation (AOG).