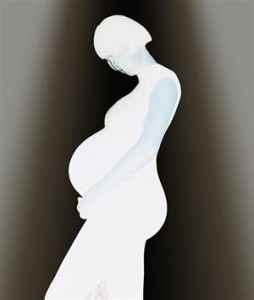 Pregnancy brings both psychological and physical changes to a woman. Although occurring gradually, the physiologic changes of pregnancies affect all organ systems of a woman’s body. These changes are necessary for both the woman and the growing fetus. Through these changes the fetus is provided with oxygen and nutrients and the woman’s increased metabolism during pregnancy is met.

EDEMA OF THE LOWER EXTREMITIES AND VARICOSITIES OF VULVA AND RECTUM

Impairment of blood flow to the lower extremities during the third trimester takes place. This is due to the pressure of the expanding uterus on veins and arteries. Decreased blood flow in the venous system can lead to edema and varicosities of the vulva, rectum and legs.

Important reminder: Edema of the lower extremity is not a sign of toxemia. It is a normal physiologic change during pregnancy. However, edema of the upper extremity needs further evaluation.

About 50% of pregnant women experiences nausea and vomiting during the early stage of pregnancy. Sometimes this sensation is even noticed even before the first missed menstrual period. As one of the first sensation apparent in pregnancy, a woman may suspect she is pregnant by noticing the occurrence of it. Known as the morning sickness, it is most apparent early in the morning, on rising, or if the woman becomes fatigued during the day.

Nausea and vomiting begin to be noticed at the same time the levels of HCG and progesterone are elevated in the pregnant woman’s body. It results from the following conditions:

PREVENTION OF NAUSEA AND VOMITING

To prevent nausea and vomiting in pregnancy the following ways are effective:

M – Make missed-up meals at some other time of the day to maintain nutrition.

O – Offering a snack before bedtime is advisable so that delaying breakfast will not cause the woman to go a long time between meals.

R – Recommend to the woman that keeping dry crackers, toast or sourball at bedside and eating a few before getting out of bed in the morning would be helpful in preventing nausea as it increases the woman’s carbohydrate intake.

N – Notify the woman that nausea usually disappears spontaneously as a woman enters her fourth month of pregnancy. Or if it persists during the second trimester of pregnancy, it may indicate the development of pregnancy complication known as the hyperemesis gravidarum and should be reported to the physician immediately.

I – Increasing carbohydrate intake relieves nausea better than any other nutrition remedy. The woman should eat small but frequent meals rather than large infrequent ones.

N – Note sudden movements and fatigue. These events should be avoided because these may cause or increase the occurrence of nausea.

G – Greasy and highly seasoned foods should be avoided. The pregnant woman’s diet should be low in fat and spices.