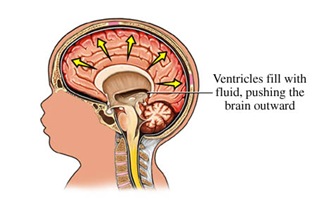 Hydrocephalus is a condition caused by an imbalance in the production and absorption of CSF in the ventricular system. When production exceeds absorption, CSF accumulates, usually under pressure, producing dilation of the ventricles.

It is a term derived from the Greek words “hydro” meaning water, and “cephalus” meaning head, and this condition is sometimes known as “water on the brain”.

People with hydrocephalus have abnormal accumulation of cerebrospinal fluid (CSF) in the ventricles, or cavities, of the brain. This may cause increased intracranial pressure inside the skull and progressive enlargement of the head, convulsion, and mental disability.

Usually, hydrocephalus does not cause any intellectual disability if recognized and properly treated. A massive degree of hydrocephalus rarely exists in typically functioning people, though such a rarity may occur if onset is gradual rather than sudden.

Hydrocephalus occurs with a number of anomalies, such as NTD’s.

Congenital hydrocephalus usually results from defects, such as Chairi malformations. It is also associated with spina bifida.

Based on its underlying mechanisms, hydrocephalus can be classified into communicating, and non-communicating (obstructive). Both forms can be either congenital, or acquired.

· It is caused by impaired cerebrospinal fluid resorption in the absence of any CSF-flow obstruction.

· It has been theorized that this is due to functional impairment of the arachnoid granulations, which are located along the superior sagittal sinus and is the site of cerebrospinal fluid resorption back into the venous system.

Non-communicating hydrocephalus, or obstructive hydrocephalus, is caused by a CSF-flow obstruction (either due to external compression or intraventricular mass lesions). 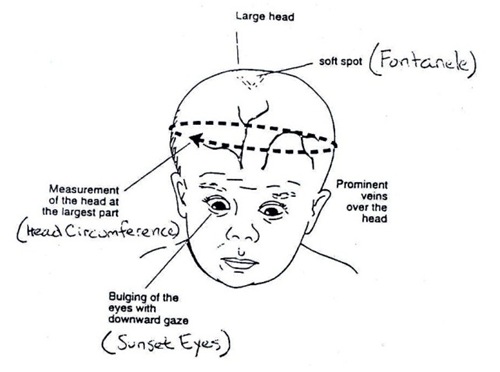 Manifestations in children include possible signs of increased ICP, which include headache on awakening with improvement following emesis, papilledema, strabismus, ataxia, irritability, lethargy, apathy and confusion.

1. Teach the family about the management required for the disorder

a. Treatment is surgical by direct removal of an obstruction and insertion of shunt to provide primary drainage of the CSF to an extracranial compartment, usually peritoneum (ventriculoperitoneal shunt)

1. The major complications of shunts are infections and malfunction

2. Other complications include subdural hematoma caused by a too rapid reduction of CSF, peritonitis, abdominal abscess, perforation of organs, fistulas, hernias and ileus.

b. A third ventriculostomy is a new nonshunting procedure used to treat children with hydrocephalus.

b. Firmly support the head and neck when holding the child.

c. Provide skin care for the head to prevent breakdown.

d. Give small, frequent feedings to decrease the risk of vomiting.

3. Provide Postoperative nursing care (nursing interventions are the same as those for increased ICP)

a. Assess for signs of increased ICP and check the following; head circumference (daily), anterior fontanelle for size and fullness and behavior.

b. Administer prescribed medications which may include antibiotics to prevent infection and analgesics for pain.

1. Monitor for shunt infection and malfunction which may be characterized by rapid onset of vomiting, severe headache, irritability, lethargy, fever, redness along the shunt tract, and fluid around the shunt valve.

a. Encourage the child to participate in age-appropriate activities as tolerated. Encourage the parents to provide as normal lifestyle as possible. Remind both the child and parents that contact sports are prohibited.

b. Explain how to recognize signs and symptoms of increased ICP. Subtle signs include changes in school performance, intermittent headache, and mild behavior changes.

c. Arrange for the child to have frequent developmental screenings and routine medical checkups.