Galactosemia is an inherited carbohydrate metabolism disorder.  This metabolic disorder is characterized by the abnormal levels of galactose in the blood (galactosemia) and in the urine (galactosuria). People with this disorder are unable to breakdown the simple sugar galactose to glucose.

This inborn error of metabolism occurs 1 in every 60,000 births. Higher incidence rate is noted in Ireland with about 1 case in every 20,000 population. It is less common in Asian people.

Galactosemia follows an autosomal recessive mode of inheritance that is typified by the absence or deficiency of any of the three enzymes that are involved in galactose to glucose conversion which are: 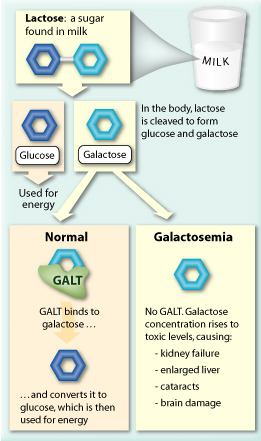 Galactose, a type of sugar, has to be converted to glucose before it can be used by the body. Lactose, the sugar found in milk, is normally broken down into galactose and glucose.

3. Finally, Uridine diphosphate (UDP)-galactose 4-epimerase (or GALE) converts UDP galactose to UDP glucose to be used by the body.

To summarize, the order of galactose conversion in its metabolic pathway in relation to the enzymes it encounters starts with GALK then GALT and finally GALE.

Type 1 – characterized by absence of the liver enzyme GALT. It is termed as the classic galactosemia. This is the most common type. People with absent or deficient GALT have intolerance to galactose.

Type 2 – characterized by the absence of the enzyme Galactokinase (GALK). It is called as galactokinase deficiency.

Type 3 – characterized by absence of the enzyme GALE. This form of galactosemia is termed as UDP-Galactose-4-epimerase deficiency.

Absence or deficiency of galactose 1-phosphate uridyltransferase (GALT) prevents the conversion of galactose into glucose. When an infant or neonate is given milk (formula milk or breast milk), the substances made from galactose builds up in the bloodstream (galactosemia) and spills into the urine (galactosuria). These can cause severe damage to the eyes, kidneys, liver and brain.

Beutler’s test – a screening test used to analyzed the cord blood if a child is known to be at risk for the disorder.

The symptoms begin to appear when the neonate is started on formula feeding or breastfeeding.

Untreated neonates may die by 3 days of age. Those who survived beyond the untreated 3 days may have bilateral cataracts and will be cognitively challenged.