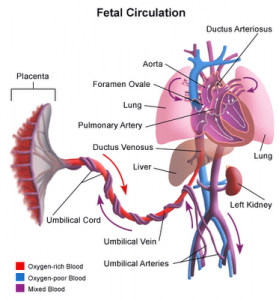 The infant takes his first breath causing the mechanical expansion of the lungs. In this way the ductus venosus and ductus arteriosus constrict as large amount of oxygen enters the young lungs. With lung inflation, the alveolar oxygen tension increases, causing reversal of the hypoxemia-induced pulmonary vasoconstriction of the fetal circulation. Clamping of the umbilical cord also increases systemic vasucalr resistance and left ventricle pressure, which further closes the ductus venosus. A decrease in pulmonary vascular resistance and an increase in systemic vasuclar resistance causes a left to right shunting and increasing PO2 which further closes the ductus arteriosus.

As changes in the cardiovascualr system at birth happens, there are some structure of the system do not function as it used to be and there are adult structures are derived from these:

Photo Credits from: Blogspot and Biosbcc.net