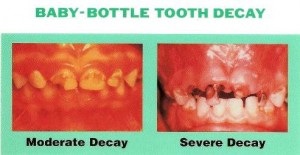 Baby bottle syndrome is a condition where an infants tooth is decayed because of putting an infant to sleep with a bottle. Tooth decay occur because while an infant is sleeping (with the bottle on the mouth), liquid from the prop bottle continuously soaks the upper front teeth and the lower back teeth. The carbohydrate in milk ferments to organic acid that demineralize the tooth enamel until it is damaged or decayed.

Milliaria is also called a prickly heat rash which is commonly occurring during hot seasons. It also occurs when the infants are overdressed or sleep in over-heated rooms.