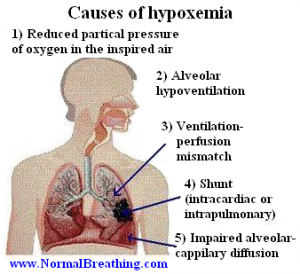 Hypoxemia is a condition from which there is a low level of partial pressure of oxygen in the arterial blood. Blood oxygen level is measured by an arterial blood test or through a pulse oximeter. Normal blood oxygen readings are between 95 to 100 percent, values under 90 percent are considered low. Severe hypoxemia occurs when oxygen saturation drops below 80 percent.

The oxygen that is inhaled passes from the air sacs in the lungs and through tiny blood vessels (capillaries) in the air sac walls. It enters the bloodstream and is distributed throughout the body. Anything that interferes with this process can cause low blood oxygen.

Hypoxemia is usually precipitated by respiratory disorders. Additionally, hypoxemia may also occur as a result of one or a combination of the following: