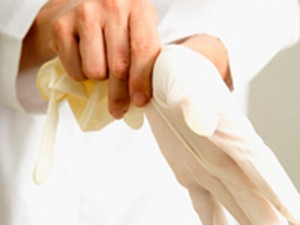 Latex have been widely used in the medical field. From gloves to rubber bands, latex plays a big role in terms of protecting health care workers from blood and body fluids. However, there are some instances that latex can bring an allergy such as contact allergy among people.

Latex is naturally taken from a rubber tree called Hevea brasiliensis. This rubber tree is abundant in Malaysia, Indonesia and Thailand. In a clear milky consistency, latex has been found to be suitable to be used as the primary material for examination gloves, rubber bands, balloons and condoms nowadays. Looking into its natural components, latex has also been to contain certain proteins that may induce allergic reaction for those who has sensitive skin.

It was William Halstead who was known to have used latex gloves as a surgical protection to his hands dating back in 1890. That was the start of latex as an important material for medical equipments, its elasticity and durability for the work has proved its usefulness for years. It was in 1980s to 1990s that there was an increase demand for latex in the market.

On the other side of the story, latex allergy has been also known. Health care workers for instance, have been greatly exposed to latex as well as latex allergy. Latex allergy can happen when the latex material contacts with the sensitive skin of the vulnerable host. An allergic reaction happens upon the contact, redness and itchiness elicit the reaction. Patients are also not exempted when it comes to allergic reactions. Some allergic reactions can also happen inside the body especially during a surgical procedure wherein latex gloves were used by surgeons. There are incidences that the latex molecules are also inhaled and difficulty of breathing can be seen.

Latex allergy can be determined by one of the three groups of signs and symptoms:

Signs and Symptoms of Latex Allergy: