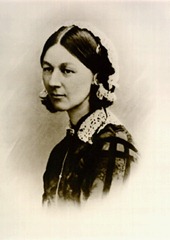 Florence Nightingale was born in Italy on 12th May 1820. Despite opposition from her family she decided to devote her life to nursing and campaigning for better health care and sanitation for all. It was her work during the Crimean War that created the legend of the Lady with the Lamp and it was her experience here that drove her to continue, researching, writing and tirelessly campaigning.

After the Crimean War she demanded a Royal Commission into the Military Hospitals and the health of the Army, she began investigating the health and sanitation in the British Army in India, and the local population. Money which had been sent by the general public to thank her for her work in the Crimea was used to establish the first organised, training school for nurses, the Nightingale Training School at St Thomas’ Hospital.

Her greatest achievement was to make nursing a respectable profession for women. Florence’s writings on hospital planning and organization had a profound effect in England and across the world, publishing over 200 books, reports and pamphlets.

Florence died at the age of 90, on 13th August 1910, she had become one of the most famous and influential women of the 19th century. Her writings continue to be a resource for nurses, health managers and planners to this day.

Florence Nightingale is famous for being the ‘Lady with the Lamp’ who nursed soldiers during the Crimean War, but this was just one of her many great achievements.