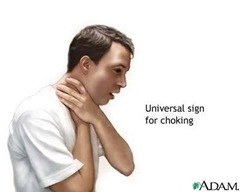 Each year nearly 2,000 deaths occur in the United States due to asphyxia caused by obstruction of breathing. Two-thirds of the deaths reported apply to children under the age of 4.

A. A small child investigates an object by placing it into his mouth.

B. A child chew well until dentition is sufficient.

C. An inedible substance can become caught in the throat.

D. Objects can be aspirated into lower air passages.

E. Obstruction may occur in adults when swallowing unchewed meat or food containing splinters of bone or shell.

F. Persons with dentures are prone to choke on food, since normal chewing sensation is diminished.

G. Eating without dentures is hazardous.

H. Alcoholic beverages before a meal decrease sensation in the mouth and normal vigilance and caution in eating, thus increasing the danger of choking.

B. Alarming attempts at inhalation (stridor or crowing sounds)

C. Discoloration (cyanosis) of the face, neck, and hands

The objective of first aid for a person who is choking is to allow the victim to assume a comfortable position and encourage him to cough. If breathing fails, administer artificial respiration and, if necessary, attempt to expel the object. Obtain immediate medical attention.

A. Swallowed objects in food passages

1. Give nothing by mouth until advised by a physician.

2. Do not give any cathartic or laxative drug to person who has swallowed a foreign object.

3. If the object is small and not sharp, observe the victim’s feces to determine whether the object has passed safely through the digestive tract.

B. Aspiration of fluids and objects in the larynx or lower air passages

A foreign body aspirated into the air passages creates an immediate crisis. Foreign bodies are usually trapped by a spasm of the muscles at the level of the larynx. The victim is unable to breathe for a few seconds. The spasm then relaxes, and the object often will be coughed out. Coughing is a protective mechanism by which a foreign body is sometimes expelled from the larynx.

1. If the object cannot be expelled by the victim within a moment or so, seek medical help at once.

2. Allow the victim to assume a position most comfortable for him.

3. Do not attempt to remove the object with your fingers.

4. Encourage the victim to cough as soon as the spasm of the larynx subsides.

5. Remain calm and reassure the victim.

6. Do not give cough syrup, medicines, crackers, or bread.

Artificial respiration should be administered only if the victim ceases to breathe or if breathing is ineffectual and death appears imminent. If unable to ventilate, seek a foreign body that may be deep in the airway, causing obstruction. Insert the index and middle fingers of one hand inside the victim’s cheek and slide them deeply into the throat to the base of the tongue. Use a sweeping motion to carry them through the back of the throat and out along the inside of the other cheek to try to remove the foreign body.

As a last resort, the first-aider should attempt to move the object blocking the air passages by turning the adult victim onto his side and using the heel of the hand to administer sharp blows between the shoulder blades over the spine. A child may be turned upside down over one arm and given two or three sharp blows between the shoulder blades. Even though relief is obtained, the victim should receive medical attention after an episode of chocking.

A. For small children

1. Keep articles that may be accidentally swallowed or aspirated out of the reach of infants and small children.

2. Caution older children not to put small objects in a baby’s mouth or within his reach.

3. Do not hold open safety pins in the mouth when changing a baby’s diaper. A pin may slip out of the mother’s mouth into the mouth of the infant. Take care not to leave safety pins within reach of the child.

5. Do not give small children nuts or candy containing nuts, raw carrots or other uncooked vegetables, fruits that require chewing, unchopped meat, or any foods containing seeds or pits until the age of 4.

6. Do not allow a child to play with beans, peas, hand kernels of corn, or large seeds.

7. Do not stimulate a child to laugh or cry when he has food in his mouth.

8. Do not permit a child to run about while eating.

9. Remove bones and shells from all foods given to a child.

10. As soon as he is old enough to learn, teach a child not to put foreign objects in his mouth.

B. For older children and adults

2. Prepare food carefully; watch for foreign objects in the kitchen that may become mixed with food.

3. If you are chocking, remain calm. Wait until the spasm passes and then cough hard. Do not try to talk.

4. If you wear dentures, take special precautions in eating. Keep them in good repair. Do not wear defective dentures at night.

5. Do not go to sleep with chewing gum in your mouth.

6. Do not chew on objects that may be swallowed or aspirated. Aside from the danger, the practice sets a bad example for small children, who learn by imitation.

7. Do not assume that all is well if symptoms disappear. Consult a physician after an episode of choking unless the object has been definitely expelled. Make a note in a diary. Infection may develop later in the lung.

8. Do not allow anyone to slap you on your back if you choke and do not try to dislodge an object from another person’s throat by this means, except as a last, desperate effort to save his life.