by: Oliver Pichay
Our Lady of Fatima University

Acne
Acne is a skin disease marked by pimples on the face, chest, and back. The most common skin disease. Increased levels of androgens (male hormones) cause the sebaceous glands to secrete an excessive amount of sebum into hair follicles. The excess sebum combines with dead, sticky skin cells to form a hard plug that blocks the follicle. Bacteria that normally lives on the skin then invades the blocked follicle. Weakened, the follicle bursts open, releasing the sebum, bacteria, skin cells, and white blood cells into the surrounding tissues. A pimple then forms.

Athlete’s foot
Athlete’s foot is a common fungus infection in which the skin between the toes becomes itchy and sore, cracking and peeling away. Properly known as tinea pedis, the infection received its common name because the infection causing fungi grow well in warm, damp areas such as in and around swimming pools, showers, and locker rooms (areas commonly used by athletes).

Burns
There are few threats more serious to the skin than burns. Burns are injuries to tissues caused by intense heat, electricity, UV radiation (sunburn), or certain chemicals (such as acids).

Dermatitis
Dermatitis is any inflammation of the skin. There are many types of dermatitis and most are characterized by a pink or red rash that itches. Two common types are contact dermatitis and seborrheic dermatitis.

Skin cancer
Skin cancer is the growth of abnormal skin cells capable of invading and destroying other cells. Skin cancer is the single most common type of cancer in humans. The cause of most skin cancers or carcinomas is unknown, but overexposure to ultraviolet radiation in sunlight is a risk factor.
Basal cell carcinoma is the most common form of skin cancer, accounting for about 75 percent of cases. It is also the least malignant or cancerous (tending to grow and spread throughout the body). In this form of skin cancer, basal cells in the epidermis are altered so they no longer produce keratin. They also spread, invading the dermis and subcutaneous layer. Shiny, dome-shaped lesions develop most often on sunexposed areas of the face. The next most common areas affected are the ears, the backs of the hands, the shoulders, and the arms.
Squamous cell carcinoma affects the cells of the second deepest layer of the epidermis. Like basal cell carcinoma, this type of skin cancer also involves skin exposed to the sun: face, ears, hands, and arms. The cancer presents itself as a small, scaling, raised bump on the skin with a crusting center. It grows rapidly and spreads to adjacent lymph nodes if not removed. If the lesion is caught early and removed surgically or through radiation, the patient has a good chance of recovering completely.
Malignant melanoma accounts for about 5 percent of all skin cancers, but it is the most serious type. It is a cancer of the melanocytes, cells in the lower epidermis that produce melanin. In their early stages, melanomas resemble moles. Soon, they appear as an expanding brown to black patch. In addition to invading surrounding tissues, the cancer spreads aggressively to other parts of the body, especially the lungs and liver. Overexposure to the Sun may be a cause of melanomas, but the greatest risk factor seems to be genetic.

Vitiligo
Vitiligo is a skin disorder in which the loss of melanocytes (cells that produce the color pigment melanin) results in patches of smooth, milky white skin. 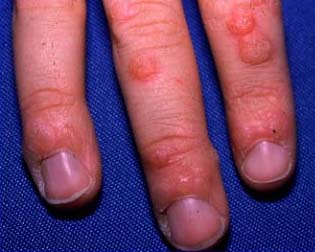 Warts
Warts are small growths caused by a viral infection of the skin or mucous membrane. The virus infects the surface layer. Warts are contagious. They can easily pass from person to person. They can also pass from one area of the body to another on the same person.
Hand warts grow around the nails, on the fingers, and on the backs of the hands. They appear mostly in areas where the skin is broken.
Foot warts (also called plantar warts) usually appear on the ball of the foot, the heel, or the flat part of the toes. Foot warts do not stick up above the surface like hand warts. If left untreated, they can grow in size and spread into clusters of several warts. If located on a pressure point of the foot, these warts can be painful.

Alopecia Areata
Is an autoimmune skin disease that causes the body’s immune system to attack the hair follicles, causing baldness in patches.

Seborrheic Dermatitis
An advanced form of seborrhea, is a non-contagious skin disease that causes excessive oiliness of the skin, most commonly in the scalp, caused by overproduction of sebum, the substance produced by the body to lubricate the skin where hair follicles are present. Seborrhea is the form of the disease where oiliness only occurs without redness and scaling. The disease commonly occurs in infants, middle-aged people, and the elderly, and is commonly known in infants as cradle cap

Paronychia
Is an often tender infection of inflammation around the base of the nail fold. It can start suddenly (acute paronychia) or gradually (chronic paronychia).

Accute Paronychia
Acute paronychia develops over a few hours when a nail fold becomes painful, red and swollen. Yellow pus may appear under the cuticle. In some cases fever and painful glands under the arms accompany a particularly severe case of acute paronychia. It is usually due to “Staph” bacteria germs.

Chronic Paronychia
Chronic paronychia is a gradual process and much more difficult to get rid of. It may start in one nail fold but often spreads to several others. Each affected nail fold (the skin that lies next to the nail) becomes swollen and lifted above the nail. It may be red and tender from time to time, and sometimes a little thick pus (white, yellow or green) can be expressed from under the cuticle.