Whole virus vaccines. either live or killed, constitute the vast majority of vaccines in use at present. However, recent advances in molecular biology had provided alternative methods for producing vaccines. Listed below are the possibilities.

Live virus vaccines are prepared from attenuated strains that are almost or completely devoid of pathogenicity but are capable of inducing a protective immune response. They multiply in the human host and provide continuous antigenic stimulation over a period of time, Primary vaccine failures are uncommon and are usually the result of inadequate storage or administration. Another possibility is interference by related viruses as is suspected in the case of oral polio vaccine in developing countries. Several methods have been used to attenuate viruses for vaccine production.

Use of a related virus from another animal – the earliest example was the use of cowpox to prevent smallpox. The origin of the vaccinia viruses used for production is uncertain.

Administration of pathogenic or partially attenuated virus by an unnatural route – the virulence of the virus is often reduced when administered by an unnatural route. This principle is used in the immunization of military recruits against adult respiratory distress syndrome using enterically coated live adenovirus type 4, 7 and (21).

Passage of the virus in an "unnatural host" or host cell – the major vaccines used in man and animals have all been derived this way. After repeated passages, the virus is administered to the natural host. The initial passages are made in healthy animals or in primary cell cultures. There are several examples of this approach: the 17D strain of yellow fever was developed by passage in mice and then in chick embryos. Polioviruses were passaged in monkey kidney cells and measles in chick embryo fibroblasts. Human diploid cells are now widely used such as the WI-38 and MRC-5. The molecular basis for host range mutation is now beginning to be understood.

Development of temperature sensitive mutants – this method may be used in conjunction with the above method.

These were the easiest preparations to use. The preparation was simply inactivated. The outer virion coat should be left intact but the replicative function should be destroyed. To be effective, non-replicating virus vaccines must contain much more antigen than live vaccines that are able to replicate in the host. Preparation of killed vaccines may take the route of heat or chemicals. The chemicals used include formaldehyde or beta- propiolactone. The traditional agent for inactivation of the virus is formalin. Excessive treatment can destroy immunogenicity whereas insufficient treatment can leave infectious virus capable of causing disease. Soon after the introduction of inactivated polio vaccine, there was an outbreak of paralytic poliomyelitis in the USA use to the distribution of inadequately inactivated polio vaccine. This incident led to a review of the formalin inactivation procedure and other inactivating agents are now available, such as Beta-propiolactone. Another problem was that SV40 was occasionally found as a contaminant and there were fears of the potential oncogenic nature of the virus. 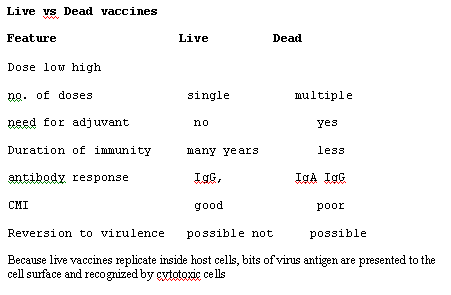