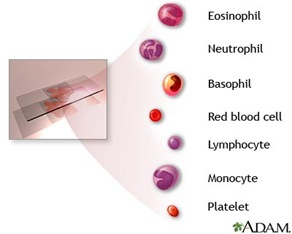 A complete blood count (CBC) is a series of tests used to evaluate the composition and concentration of the cellular components of blood.

It measures the following:

CBC also includes information about the red blood cells that is calculated from the other measurements:

The platelet count is also usually included in the CBC.

The CBC provides valuable information about the blood and to some extent the bone marrow, which is the blood-forming tissue. The CBC is used for the following purposes:

There is no special preparation needed

How the Test is Performed: 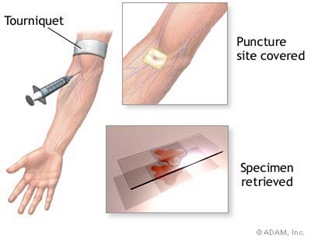 Blood is drawn from a vein, usually from the inside of the elbow or the back of the hand. The puncture site is cleaned with antiseptic. An elastic band is placed around the upper arm to apply pressure and cause the vein to swell with blood.

A needle is inserted into the vein, and the blood is collected in an air-tight vial or a syringe. During the procedure, the band is removed to restore circulation. Once the blood has been collected, the needle is removed, and the puncture site is covered to stop any bleeding.

In infants or young children, the area is cleansed with antiseptic and punctured with a sharp needle or a lancet. The blood may be collected in a pipette (small glass tube), on a slide, onto a test strip, or into a small container. A bandage may be applied to the puncture site if there is any bleeding. 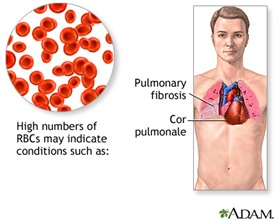 High numbers of RBCs may indicate:

Low numbers of RBCs may indicate: