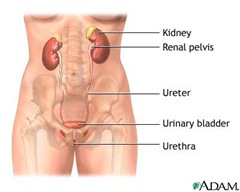 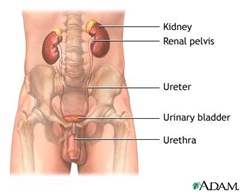 A urinary tract infection (UTI) may occur in the:

Bladder – Cystitis is an infection of the bladder. This is the most common form of UTI; it can be aggravated if the bladder does not empty completely when you urinate.

Urethra – Urethritis is infection/inflammation of the urethra. This can be due to other things besides the organisms usually involved in UTI’s; in particular, many sexually transmitted diseases (STD’s) appear initially as urethritis.

Ureter – Ureteritis is infection of a ureter. This can occur if the bacteria entered the urinary tract from above, or if the ureter-to-bladder valves don’t work properly and allow urine to “reflux” from the bladder into the ureters.

Kidney – Pyelonephritis is an infection of the kidney itself. This can happen with infection from above, or if reflux into the ureters is so bad that infected urine refluxes all the way to the kidney.

Symptoms depend on age of person and where the UTI is located .

Symptoms of urethritis often include:

Symptoms of cystitis often include:

Symptoms of Pyelonephritis often include:

Other symptoms of UTI’s: