Cirrhosis is a consequence of chronic liver disease characterized by replacement of liver tissue by fibrous scar tissue as well as regenerative nodules (lumps that occur as a result of a process in which damaged tissue is regenerated),leading to progressive loss of liver function. Cirrhosis is most commonly caused by alcoholism, hepatitis B and C and fatty liver disease but has many other possible causes. Some cases are cryptogenic, i.e., of unknown cause, but most of these are probably due to previously unrecognized fatty liver disease.

Ascites (fluid retention in the abdominal cavity) is the most common complication of cirrhosis and is associated with a poor quality of life, increased risk of infection, and a poor long-term outcome. Other potentially life-threatening complications are hepatic encephalopathy (confusion and coma) and bleeding from esophageal varices. Cirrhosis is generally irreversible once it occurs, and treatment generally focuses on preventing progression and complications. In advanced stages of cirrhosis the only option is a liver transplant. 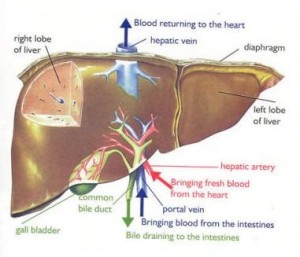 The word “cirrhosis” derives from Greek kirrhos, meaning “tawny” (the orange-yellow colour of the diseased liver). While the clinical entity was known before, it was René Laennec who gave it the name “cirrhosis” in his 1819 work in which he also describes the stethoscope.