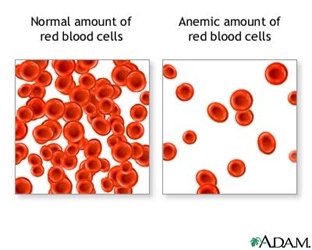 Anemia is the reduction in red blood cells (erythrocytes) thus decreasing the oxygen carrying capacity of the blood due to the following (1) excessive blood loss (2) deficiencies and abnormalities of RBC production (3) Excessive destruction of RBC.

These symptoms appear in most types of anemia:

Different types of anemia have different causes and symptoms.

Iron Deficiency Anemia: Iron deficiency is one of the most common causes of anemia, especially in women. In the U.S. alone, twenty million women suffer from iron deficiency anemia. Iron deficiency causes insufficient hemoglobin production which, in turn, causes anemia and anemia symptoms.

Thalassemia: Causes of anemia often include genetic mutations. Thalassemia is one of the genetically inherited types of anemia. Thalassemia occurs when the body’s genes, which are responsible for proper hemoglobin production, become damaged or mutated. Like sickle cell anemia, thalassemia is one of the hemolytic anemia types.
Many possible gene variations can cause thalassemia, and the disease has both mild and severe varieties. Cooley’s anemia is the most common severe thalassemia in the U.S. The disease tends to be present at birth and its symptoms include:

A number of ethnic groups are at higher risk of developing thalassemia, including people of African, Chinese, Filipino, Indian, Italian, Greek and Middle Eastern ethnicity.
Treatment for thalassemia depends on the severity of the disease. Mild types of thalassemia may be treated with regular blood transfusions. Severe cases require multiple blood transfusions, iron chelation therapy to remove excess iron from the blood and bone marrow transplants. Without treatment, severe thalassemia often proves fatal in early childhood.

Aplastic Anemia: Aplastic anemia is one of the rarer types of anemia, occurring when the body makes insufficient red and white blood cells. Causes of aplastic anemia include: