Nurses are part of a workforce which aims to promote health and save lives. Though collaboration with co-nurses, physicians, other members of the healthcare team and even patients is important in order to achieve optimum results, there have been reports of violence occurring in the workplace. 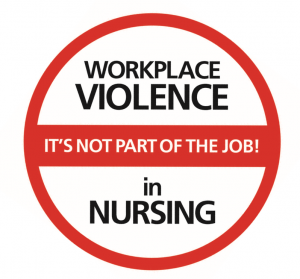 According to the National Institute for Occupational Safety and Health (NIOSH), workplace violence is any physical assault, threatening behavior or verbal abuse occurring in the workplace, which includes overt and covert behaviors ranging in aggressiveness from verbal harassment to murder.

The American Nurses Association considers workplace violence as one of the most dangerous occupational hazards facing nurses working in today’s healthcare environment. Furthermore, according to the Bureau of Labor Statistics (2006), the healthcare sector led all other industries in workplace violence, with 45% of nonfatal assaults leading in loss of work days committed against registered nurses. In a health and safety survey of more than 4,600 nurses conducted in the year 2011, ANA found 11% of respondents had been physically assaulted in the previous 12 months while just more than 50% said they had been threatened or verbally abused.

Nurses are said to be at augmented risk of workplace violence due to the lack of violence prevention programs, low staffing levels, inadequate staff training on identifying and coping with possibly unsafe patients, insufficient security, and undetected weapons.

In recent years, more and more states are passing legislation to help avert violence against healthcare workers. Idaho, for example, became the 30th state to make violence against emergency nurses a felony. If found guilty, those who commit the crime will now spend up to three years in prison if convicted.

Aggressors often include: agitated clients in mental health facilities and the emergency department, demented elderly patients in medical and geriatric wards, nursing homes and rehabilitation centers, and any patient with a history of assault in mental health, hospital care, and community health are common sources of verbal and physical violence against nurses and other healthcare providers.

According to Adam Sachs, communications and public relations representative for the ANA, there are some ways to be done by employers to prevent workplace violence from occurring. These include:

For the part of nurses in this issue, there are precautions they can take to safeguard their own safety. These are: