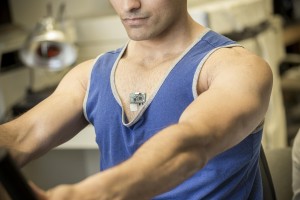 Innovations and technology are not new to healthcare anymore. In fact, the healthcare profession continue to warmly embrace the wonders brought about by new discoveries in patient care. Recently, researchers have created a wearable, tricorder-like device which is said to be the first to measure biochemical and electrical body signals at the same time. This may seem like a dream come true to star treks fans out there as the tricorder was used in the fictional TV series to scan and gather detailed information about places and living things.

Known as the “Chem-Phys patch,” this device measures real-time levels of lactate, a biochemical that serves as an indicator of physical activity, as well as the heart’s electrical activity. In simpler terms, this device can monitor a person’s fitness levels and heart function at the same time.

According to Mercier, “one of the overarching goals of our research is to build a wearable tricorder-like device that can measure simultaneously a whole suite of chemical, physical and electrophysiological signals continuously throughout the day.”

“This research represents an important first step to show this may be possible,” he adds.

In a study published in Nature Communications, Mercier and colleagues reveal how the device was created and how it works. According to them, the majority of wearable fitness trackers currently on the market only have the ability to measure one body signal at a time, such as the number of steps taken or heart rate. Also, almost none of them have the ability to measure chemical signals, such as lactate.

The team set out to address this gap in the field by creating a wearable sensor that can simultaneously measure electrical and biochemical body signals.

How it was created

This novel technology is made of a thin, adhesive, flexible sheet of polyester, which the researchers manufactured using screen printing. A lactate-sensing electrode is positioned in the center of the patch, and two electrocardiogram (EKG) electrodes (which sense the heart’s electrical signals) are located either side.

Creating this device wasn’t exactly easy as the main challenge the team faced was guaranteeing that the signals from each electrode did not interfere with each other, which could then skew the results. The researchers placed the electrodes at several distances from each other and tested which distance best avoided interference. After such, they found that a distance of 4 centimeters, which is around 1.5 inches, between the EKG electrodes provided the best quality signal.

The researchers also needed to warrant that the EKG sensors were entirely separate from the lactate sensor because the lactate sensor works with the help of a small voltage, which can pass through sweat, it has the potential to disrupt EKG readings. Furthermore, to make sure sweat only comes into contact with the lactate sensor, avoiding the EKG electrodes, a soft, water-repellent silicone rubber was added to the device.

Next, the researchers connected each sensor to a small, custom-printed circuit board. This consists of a microcontroller and a Bluetooth low energy chip, which send the information gathered by the device to a smartphone, smartwatch, or laptop.

How it was tested

Benefits in a variety of areas

Dr. Kevin Patrick, a physician and director of the Center for Wireless and Population Health Systems at UC San Diego, who was not involved with the research explains, “the ability to sense both EKG and lactate in a small wearable sensor could provide benefits in a variety of areas.”

Being a member of the Center for Wearable Sensors, he adds “there would certainly be interest in the sports medicine community about how this type of sensing could help optimize training regimens for elite athletes. The ability to concurrently assess EKG and lactate could also open up some interesting possibilities in preventing and/or managing individuals with cardiovascular disease.”