What You Need To Know About Sickle Cell Disease 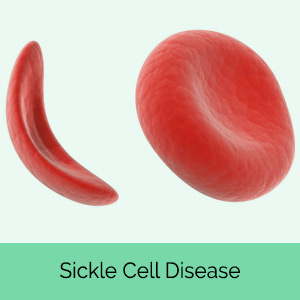 It’s a cozy Saturday night and while all others her age went out to party the night away, Abby chose to stay in and enjoy the night at home. “What a perfect night to study,” Abby exclaims as she takes in the sky full of stars, the soft classical music playing on her phone and the cool breeze kissing her cheeks. Motivated to study for her classes next week, she grabs the nearest book and opens it to the chapter that she hasn’t read yet.

“Sickle cell disease,” it said. Hmm, she heard about this before, but she’s not quite sure. Ah! Of course, it was the case of one of the patients in the ward the other week. Intrigued and eager to learn more, she reads on. Who knows, she might be handling a patient with this case someday?

Getting to know “Sickle Cell Disease”

In all forms of SCD, at least one of the two abnormal genes causes a person’s body to make hemoglobin S. When a person has two hemoglobin S genes, Hemoglobin SS, the disease is called sickle cell anemia, which is the most common and often most severe kind of SCD. The other common forms of SCD are Hemoglobin SC disease and hemoglobin S? thalassemia.

According to statistics, SCD affects nearly 100,000 people in the United States and is most common in Africans and African-Americans. It is also found in other ethnic and racial groups, including people from South and Central America, the Caribbean, Mediterranean countries, and India.

What happens when you have SCD?

Normally, hemoglobin in red blood cells are disc shaped, which allows the cells to be flexible so that they can move through large and small blood vessels to deliver oxygen. However, in SCD, the red blood cells form into a crescent shape, like a sickle. Sickle red blood cells live only 10-20 days instead of the normal 120 days. Sickle cells can’t change shape easily, so they tend to burst apart or hemolyze.

It must be noted that sickle-shaped cells are not flexible and can stick to vessel walls, causing a blockage that slows or stops the flow of blood. When this happens, oxygen can’t reach nearby tissues.

Though it is known that the body is always making new red blood cells to replace the old cells, in SCD, it may have trouble keeping up with how fast the cells are being destroyed causing the number of red blood cells to be usually lower than normal. This condition is called anemia and can make a person have less energy.

The lack of tissue oxygen can cause severe pain and permanent damage to the brain, heart, lungs, kidneys, liver, bones, and spleen. Severe pain is an emergency called acute sickle cell crisis and pain attacks can occur without warning. A person may not know what brought on the pain, but infection and dehydration are common triggers.

SCD is inherited, which means that the disease is passed by genes from parents to their children. It is not contagious. A person cannot catch it, like a cold or infection, from someone else. About 2,000 babies are born with sickle cell disease each year in the United States.

Those who inherit only one sickle hemoglobin gene are carriers (sickle cell trait) and do not have anemia or painful sickle cell crises. However, they have a slightly higher incidence of certain conditions such as blood in the urine or urinary tract infections. About 2 million Americans have sickle cell trait.

Rapid screening tests are also available that detect the formation of sickle red blood cells or clumps of abnormal sickle hemoglobin when oxygen is removed from the blood. However, these tests are less commonly used, because they cannot distinguish between sickle cell trait and sickle cell disease.

Symptoms of sickle cell crisis include:

Patients with sickle cell disease may develop severe pain in the chest, back, arms, legs, and abdomen. Pain can occur anywhere in the body. Also, sickle red blood cells in the lungs can cause severe illness with chest pain, fever, and difficulty breathing. Additionally, sickle cell disease can also cause permanent damage to the brain, heart, kidneys, liver, spleen, and bones. The severity and symptoms vary greatly from person to person, even within the same family.

Studies have shown that the regular use of hydroxyurea decreases the frequency and severity of sickle cell crises and reduces the number of blood transfusions and hospitalizations.

In high-income countries like the United States, the life expectancy of a person with SCD is now about 40–60 years compared to the year 1973, wherein the average lifespan of a person with SCD in the United States was only 14 years. This is due to improvements in treatment specifically advances in the diagnosis and care of SCD. Long-term treatment with hydroxyurea may prolong survival.