Survey Says Majority of Tablet and Smartphone Users are Nurses 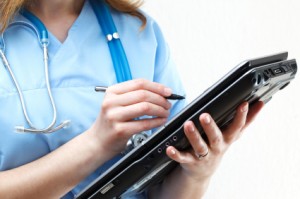 We all know about the latest trends in mobile technology today. Who doesn’t? It’s advertised all the time and can be seen virtually everywhere we go. Even kids can operate one of these days, amazingly enough. Not to be left behind are the growing number of nurse educators who appear to have been caught up with the latest of tablets and mobile phones recently.

According to a fresh survey, results have been collected with regards to tablet use, including smartphones and eReaders inside the nursing community. Springer Publishing Company, a front runner in social science and health care publishing recognized as an inventive psychology, nursing, social work, gerontology, counseling, rehabilitation, and public health publisher, has conducted this fresh survey. Apparently, the opinion poll displayed that about a thousand professional nurses currently own and utilize mobile devices, and also revealed their first choice in both nursing as well as medical apps, not excluding their choice of social media use.

One main result that the survey has discovered is that within this community, which on the greater part are nurse educators with higher levels of nursing degrees, there are approximately 74.6% who own a tablet computer or a smartphone, and more or less half, which is 41.5% have an eBook reader. Those with eBook readers have the Amazon Kindle, which is out-pacing without any trouble the Barnes & Noble Nook, having a 61.4% adoption rate as opposed to 16.8%, in that order. Even though a lot of those who have an eBook reader have not yet bought medical or nursing eBooks, 31.4% already have. Furthermore, a trivial majority, which is about 53.6%, of those who have smartphones have installed or downloaded medical or nursing applications.

The said survey also had a poll result which revealed participants on their use of social media, and discovered that about 68.4% of the responders make use of Facebook, which is the leading platform, with only 37.7% who are on LinkedIn, and a small amount of only 10.7% who are on Twitter.

According to Vice President of Digital Business Development at Springer Publishing Company Pascal Schwarzer the results point out the speedy increase of the use of mobile technology among those who are in the health care field, as well as the increasing demand for applications and eBooks that provide both professional development as well as reference requirements of nurses.

Shwarzer goes on to say that this pattern displays an abundance of new chances for those industries that cater to the lines of work in the health care field. As such, Springer Publishing Company, for starters, is eager to comply with the ever increasing desires of this community by making available of practically every title they have as eBooks as well as introducing a program on digital product development.