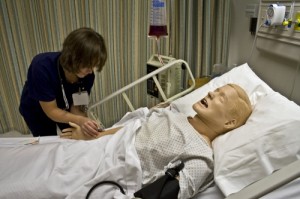 Wayne State University College of Nursing has developed a state-of-the-art simulation laboratory designed to prepare the nursing students for the real world.

The WSU’s Sim Lab allows students to care for patients and gain feedback from them at each of the 10 bays. However, the patients aren’t human patients—they’re life-sized, high-fidelity simulators, or, as they’re often called, manikins.

The lab is equipped with 10 simulators—such as the SimNewB, which represents a newborn baby, Nursing Kid, SimMan and SimMan 3G—ranging from low-fidelity to high-fidelity. 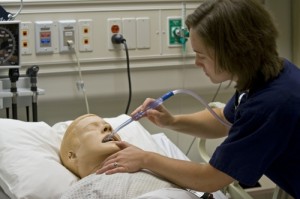 Low-fidelity manikins are task trainers, these are the manikins that lie in beds and allow students to practice dressing changes or giving patients baths. Partial task trainers are often models of limbs such as arms and are used to practice drawing blood or starting an IV.

With regards to moderate-fidelity manikins, students are able listen to the “patient’s” lungs and heart beat, but the manikin’s chest does not move.

The most advance and most frequently used are the high fidelity manikins, these manikins are as realistically close to a human patient as possible.

“(T)hey can blink, if you shine a light in their eyes, their pupil will react. They talk. They come with some pre-programmed stuff like, ‘it really hurts’ or, ‘I don’t feel good.’ But we also have the ability to speak for the manikin and it comes out of the manikin’s mouth. So for instance, to make it feel more real, I might play a part of the patient’s voice,” Shpakoff said. 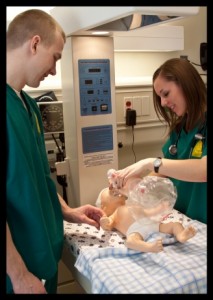 Aside from that, the high-fidelity simulators have the capability to cry, sweat, bleed, foam at the mouth, have seizures or swell up its tongue just like a human. It has also programmed with drug recognition technology which allows teachers and students to read via computer how much medication is being given through an IV and how fast or slow it’s being given.

“We’re able to tell them based on the computer if they’re doing their chest compressions right, if they’re bag masking properly. It tells them everything. So not only are they going through it but they’re going through it and getting immediate feedback on if they’re doing it right or not,” said Karen Wykowski, graduate teaching assistant who teaches in the lab. “Everything they’re (students are) doing, other than it being on a live person, is real.”

According to the research, simulation is a useful teaching methodology. It has the ability to enhance active student learning and to move nurse educators beyond the traditional role of educator. Aside from that it can facilitate students in becoming more active participants in their own learning and can provide the vehicle to connect theory and the practice environment.

For more pictures and information about the sim lab, visit http://nursing.wayne.edu/simlab/index.php