Nelly stares as the surgeon starts to close the incision of the patient. It’s her 2nd time being assigned in the OR, and she just couldn’t help but be amazed of how much more there is to learn. So far, she is loving the OR. “I’m going to be an OR nurse someday,” she tells herself as she watches how the surgeon expertly does his job. It really requires precision and skill, trying to put the skin together, she thinks to herself. She wonders if that is the only way to do so. She wonders if it will scar.

Healthcare has its fair share in advancements and innovations. Many has seen the wonders technology does. Another innovation incorporated in healthcare is the use of polymer mats in sealing incisions. 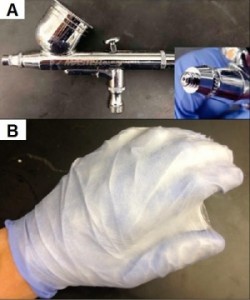 In their aim to complement or even substitute sutures, researchers have proposed applying sticky, biodegradable mats of polymer nanofibers onto surgical incisions to seal them and promote healing.

But existing methods of depositing such mats aren’t compatible with living cells and tissues. Now, researchers have demonstrated that they can spray polymer nanofibers directly onto biological tissues using an airbrush from a hardware store. (ACS Macro Lett. 2014)

According to Peter Kofinas, a bioengineer at the University of Maryland, College Park, “mats of polymer nanofibers show potential not only for surgery but also as biodegradable, drug-releasing implants or as scaffolds for tissue engineering.”

Since existing methods for making the mats which include electrospinning, which makes use of electric current—would injure living cells if the mats were made in situ. Kofinas and his colleagues have modified a commercial airbrush, which is a tool more commonly used to apply paint, in order to find a way to generate the mats right on the tissue.

The did this by testing diverse formulations of a biodegradable polymer, poly(lactic-co-glycolic acid), or PLGA, to find one that would work in the airbrush. By selecting a specific deviation with a specific molecular weight of PGLA and using acetone as a solvent they were able to control the diameter of the resulting fibers, ending up on settling for mats with fiber diameters of about 370 nm.

They also tested this on pig organs, showing that it can seal diaphragm hernias and cuts to the lung, intestine, and liver. The acetone dissolves before the fibers are deposited, indicating no toxicity problems with the acetone. Cells sprayed with the PLGA nanofibers also show no change in health after 24 hours. The nanofiber mats degraded completely over a 42-day period as lab tests show.

Though this new invention may work great and without posing any extra problems, closure is still needed especially in other parts of the world. Furthermore, this may only be applicable to some surgeries.