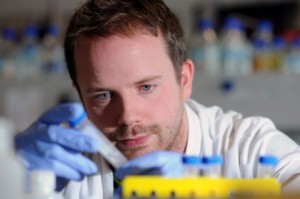 Fabry disease, a rare childhood metabolic disorder, increases the buildup of lipids in the blood vessels resulting to conditions like problems in the kidney function. A biochemist at the University of Massachusetts, Scott German, generated a major advancement in the treatment of this disease.  The findings have been published as a cover story in an issue in Chemistry and Biology issue. This new discovery on a promising treatment also paved way to understanding other disorders that has something to do with protein-folding which includes Alzheimer’s, Parkinson’s and Huntington’s disease.

A recycling component of a cell, alpha-galactosidase (?-GAL) enzyme is coded by the genes in a human body. In Fabry disease, the gene that codes the essential enzyme is faulty. Hence, GAL underperformance results to symptoms noted in a person diagnosed with a Fabry disease. Under normal conditions, ?-GAL breaks down GB3, an oily lipid, in the recycling center of the cell known as lysosome. Failure of this normal process to occur would result to buildup of lipids in the blood vessels and organs. The affected individual may survive to adulthood but the accumulating lipids would result to life-threatening conditions such as kidney failure and heart problems.

Presence of faulty genes results to a misfolded protein which becomes unstable and malfunctioned. To better understand the mechanism of the protein, in normal circumstances they appear like orgami papers that are folded in precise shapes and forms with the intervention of ?-GAL. Absence of this enzyme would cause improper folding of proteins leading to an erroneous operation of cells. Presently, this condition is managed Enzyme Replacement Therapy (ERT). This is the only FDA-approved method to manage the condition for storage disorders of lysosomes such as Fabry, Pompe and Gaucher Diseases. However, the price for the therapy is quite high and processes involve for the purification and replacement of the damaged enzyme is complicated. Also, it must be administered by physicians only.

Another way to treat the condition is through pharamacological chaperone (PC) therapy which is now solidifying foundations in the Phase III of clinical trials. The method is performed by using tiny molecules, called the chaperone, to keep the proteins in the precise way of folding. The theory sounds brilliant, but according to the scientists conducting the study the biochemical mechanism is not yet fully understood.

Presently, the scientists are exploring explanation on the chemical and biological basis of stabilizing ?-GAL enzyme. Furthermore, the researchers made a statement how the PC therapy could be priced lower in the coming years than the standard ERT. The possibilities of using oral medications to cure the condition might also be possible. this piece of study backs up a similar knowledge from a doctoral thesis made by a UMass Amherst student, Abigail Guce, which has been supported by the National Institute of Health.

In the ongoing clinical trial, the same principle is applied to other protein-building diseases which includes Parkinson’s and Alzheimer’s disease. Experts are pressing on to keep the proteins from misfolding by the intervention of small chaperone molecules which currently advances the understanding on the processes involved.