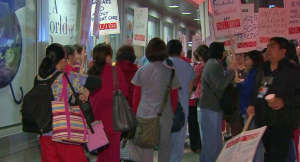 Nurses at Long Beach Memorial Medical Center are preparing for a strike possibly next week due to some disagreements in a contract made between them and the hospital. The union represents 1,900 registered nurses who are currently employed in the hospital has the power to encourage a strike since a fair contract was not talked about. The union got a majority vote of implementing a strike according to the union secretary Margie Keenan, a nurse who has worked for 38 years. The decision was made after a two-day voting.

According to the Los Angeles Times, the union of nurses have requested for lunch breaks, avoidance of furloughs as well as wage increase and coverage on health benefits. The impending plan for a strike came along only a few days after a meeting was done with the hospital officials. The meeting was intended to end the month-long discussions about the concerns of nurses being voiced out above and the end decision is an impending strike. However, the union is also open for negotiations from the hospital management and the impending strike might also be waivered if needed. If the negotiations will be done between Tuesday and Wednesday, then the strike will be lifted off.

The hospital management claimed that the call-offs or use of floaters in the unit is a way to stabilize the staffing as well as the human resource. However, on the nurses’ part, being floated into another area once in a while to treat patients seemed to be unstable for their working status as well as working environment. In addition, the hospital also assures that they are economically stable and presented the truth that the income relies on the number of patients being admitted. If there are fewer patients most likely nurses will be sent home since no income is being generated.

According to a nurse who has worked for 24 years in the hospital, a strike may not be necessary if only hospital officials can come across an agreement that it fair enough to its hospital employees. On the side of the hospital management, Myra Gergorian stated that a strike can be avoided only if there is a timely and firm decision regarding the terms to be agreed between the two parties.

If the strike will happen next week, this will be the second strike in history that is labor-related. The first major strike of nurses was in October 2002. The issue was about a disagreement between the terms over new pension programs and increase of pay for veteran nurses. The demand for improvement of staffing levels was also pondered during that particular strike.

According to the reports both parties are still open for last minute negotiations before the strike happens.