New discoveries and advancements are once again causing amazement in the healthcare profession. As years go by, new inventions and innovations continue to be incorporated in healthcare in its aim for better, more effective and quality patient care. One of the inventions currently being studies on is the non-invasive down’s syndrome test. 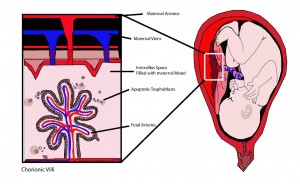 At present, pregnant women are presented with an ultrasound scan and blood test to assess the likelihood that their child may have Down’s. If there is judged to be a greater than one-in-150 chance the baby will have the condition, an amniocentesis, in which a needle is used to extract a small sample of amniotic fluid from the womb, is then offered. This procedure is considered more risky, with one in 200 women who undergo the test experiencing miscarriage.

However, there is this new test introduced in healthcare, called cffDNA testing, which is an analysis of cell-free fetal DNA found in the pregnant person’s blood. ‘Non-invasive prenatal testing’ (NIPT), because all that is needed is a maternal blood test.

The test requires a simple blood draw from the mother. Fragments of fetal DNA, which makes up between 3 and 13 percent of the pregnant person’s blood during pregnancy but disappears entirely right after delivery, are isolated and analyzed for chromosomal abnormalities, including Down syndrome (also known as trisomy 21), Edwards syndrome (trisomy 18), and Patau syndrome (trisomy 13), all of which can cause serious developmental and medical issues.

Studies show that the tests have 98 percent ability to screen for Down syndrome and a very low rate (0.5 percent) of false positives. Specifically, in one study of over 1,000 pregnancies in the United Kingdom, the rate of false positives came in at 0.1 percent.

However, though, NIPT can be performed from 10 weeks of pregnancy since it is difficult to collect enough cell-free fetal DNA (cffDNA) from the blood sample before 10 weeks. Even after 10 weeks there is a chance that they will not be able to collect enough cffDNA to provide a result, which can happen in about 3% of cases.

Better than other methods?

This test is deemed preferable compared to other tests. It is because:

Nevertheless, the test does not totally eradicate the need for an amniocentesis since anyone who has a positive NIPT test result would then need to have an amniocentesis to confirm the result.