Gone are the days when nursing used to only involve treating the sick based on instincts. Centuries have passed and now, after facing tons of demands in healthcare, new innovations have been incorporated into the healthcare profession in its aim to provide more efficient and effective patient care.  Examples are needleless syringes, infusion pumps, and now the smart insulin patch. 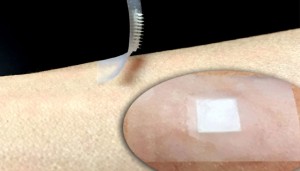 The smart insulin patch is basically a microneedle patch which automatically releases insulin in response to high glucose levels. The patch, which is a thin square no bigger than a penny – is covered with about 121 tiny needles, each about the size of an eyelash. These “microneedles” are packed with microscopic storage units for insulin and glucose-sensing enzymes that rapidly release their cargo when blood sugar levels get too high.

About 400 million people worldwide have diabetes, either type I or type II. Diabetics need to constantly monitor and regulate their insulin manually using glucose measurement devices and needles since poor glucose control can lead to serious complications such as limb loss and organ failure.

According to Zhen Gu, PhD, co-author of the study Proceedings of the National Academy of Sciences, and a professor in the Joint UNC/NC State Department of Biomedical Engineering, “this patch for diabetes works fast, is easy to use, and is made from nontoxic, biocompatible materials”.

John Buse, MD, PhD, co-senior author of the PNAS paper and the director of the UNC Diabetes Care Center, said, “Injecting the wrong amount of medication can lead to significant complications like blindness and limb amputations, or even more disastrous consequences such as diabetic comas and death.”

Gu’s team packaged insulin within nanoparticles containing an enzyme called glucose oxidase, which becomes active in the presence of high glucose levels. They also fitted the lipids that make up the nanoparticle walls with a hydrophobic compound called 2-nitroimidazole, which becomes hydrophilic when oxygen levels are low. When glucose levels reach a critical level, the glucose oxidase begins consuming oxygen, creating a hypoxic local environment around the nanoparticles. This then triggers the 2-nitroimidazole to become hydrophilic, altering the nanoparticles’ conformation in a way that releases the insulin within.

According to Michael German, clinical director of the Diabetes Center at the University of California San Francisco Medical Center who was not involved in the study, “smart insulin pumps and patches could certainly help diabetics if they can be equipped to respond to glucose levels as they are changing rather than after they have already reached a critically high threshold.”