First Case of Acute Myelitis in a Zika Patient 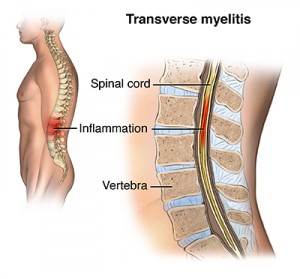 Already giving hundreds and even thousands of people quite a scare, the Zika Virus continues to terrorize the world as a 15-year-old girl infected with the Zika virus was diagnosed with a paralysis-causing myelitis by French researchers.

This is the first case of acute myelitis following infection with Zika virus to be reported according to a research team from Inserm Unit 1127 Brain and Spinal Cord Institute (Inserm/CNRS/Sorbonne University) and neurologists at Pointe-à-Pitre University Hospital and the University of the Antilles in French West Indies.

This case was the subject of a Case report published in The Lancet on March 3, 2016.

According to Annie Lannuzel of the University Hospital Center Pointe-a-Pitre in Guadeloupe as stated in the report, “until recently, Zika was thought to cause benign infections in humans. The presence of Zika virus in the cerebrospinal fluid of our patient with acute myelitis suggests that this virus might be neurotropic (something that attacks the nervous system).”

A young patient in the acute phase of an infection by Zika virus presented motor deficiency in the 4 limbs, associated with very intense pain and acute urinary retention. The presence of the virus was confirmed in the cerebrospinal fluid, blood and urine, researchers said.

In January 2016, a 15-year old girl was admitted to the Pointe-à-Pitre University Hospital in Guadeloupe, with left-side hemiplegia. She showed urinary retention on her second day in hospital. The left-side hemiplegia and pain became worse and the doctors recorded a loss of sensation in the legs.

The researchers then detected high concentrations of Zika virus in the serum and cerebrospinal fluid on the second day after admission, which was 9 days after the symptoms began. Tests for shingles, chickenpox, herpes virus, legionellosis and mycoplasma pneumonia were negative.

The patient was treated with methylprednisolone (1 g), an anti-inflammatory drug, from the first day and daily for 5 days. Seven days after admission, her neurological condition had improved. According to researchers, “at present, the patient is still in hospital but she is out of danger. She has signs of moderate weakness in both legs but is walking unaided again.”

“This case strengths the hypothesis regarding the neurotropic nature of the Zika virus. It highlights the existence of neurological complications in the acute phase of the infection, while Guillain Barré syndromes are post-infectious complications. Furthermore, this is a single case. Future studies will be needed,” they add.

According to the World Health Organization, 41 countries or territories have reported transmission of Zika within their borders since last year, and eight have reported an increase in Guillain-Barre cases. Zika has also been declared as a health emergency. Furthermore, the increase in microcephaly and other baby malformations has so far “only been reported in Brazil and French Polynesia.”

At present, there is no vaccine or treatment for Zika.