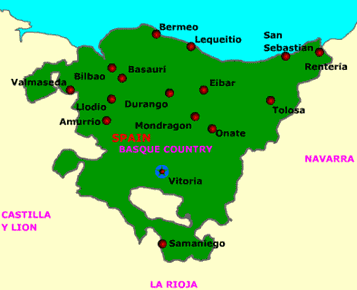 The first batch of Filipino health workers have arrived in Spain. It is composed of 27 nurses mostly came form the province of Nueva Vizcaya.The Philippine Embassy in Madrid conducted a briefing for them last July 19 on the salient aspects of Basque culture and society, as well as Spanish labor laws and conditions. It also extended consular services to the Filipino residents in Getxo-Bilbao area in the Basque Country.

According to the Department of Foreign Affairs (DFA), the deployment of Filipino nurses in Spain is part of the RP-Spain Memorandum of Understanding on Migration Flows signed in June 2006. Under the agreement, Spain will open its doors to the employment of Filipino health workers. 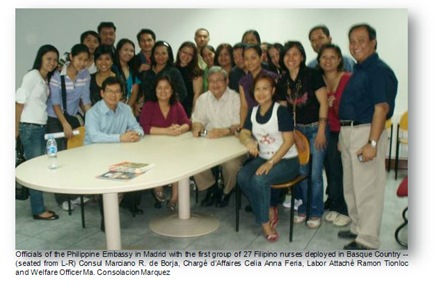 Initially, Filipino nurses will work as nursing assistants and caregivers in four Basque homes for the elderly (residencias de mayores) operated by Urgatzi, Igurco, Residencial Aulaga and Olimpia Bass. They have a one-year renewable contract.

The Spanish Ministry of Education will evaluate, for accreditation purposes, the nursing degrees within a period of six to nine months. After getting the official accreditation, they will be able to practice their profession and will earn the same salary as regular Spanish nurses.

Notwithstanding the present economic crisis in Spain, the demand for foreign nurses remains high. To date, there are about 190 Filipino nurses working in the Madrid area.

The Philippine Embassy is talking with prospective Spanish employers on the employment of more Filipinos in the health sector. The Embassy is also confident that the Filipino nurses now deployed in Madrid and the Basque Country will be followed by other groups in the coming months.