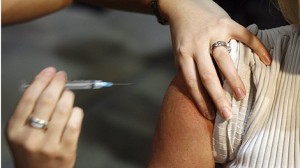 Among the participants were 30% nurses, which include hospital nurses as well as midwives, 42.5% of GP practice nurses, 38.2% of GPs, and 37% of doctors not including GPs.

The report further revealed data with regards to the details of the seasonal flu vaccine uptake for those patients who are at high risk, such as present condition and age, showing that 25.2% of 6 months old to 2 years old were vaccinated the previous winter, a low figure compared to 51.7% of 16 to 65 year olds who are at risk.

Chief Medical Officer Dame Sally Davies greatly recommended that NHS personnel should get themselves protected since they will be highly exposed to the grave flu effects over winter. This will also serve to protect their patients and families as well. Anne Milton, Public Health Minister, backs up Dame Davies recommendation, stating that nurses, particularly those who interact with patients who have severe health problems and midwives who work with pregnant women, ought to get themselves the vaccination in order to protect not only themselves but their patients as well.

On the same note, Louise Silverton, RCM Deputy General Secretary, emphasized that midwives should really promote the flu vaccination to pregnant women. Additionally, midwives themselves should also greatly think about getting the vaccination themselves so as to protect themselves, their families, and their pregnant patients alike.

Another officer, Dr. Peter Carter, Chief Executive and General Secretary of the Royal College of Nursing also suggested that nurses ought to play their part by taking care of their health since both the healthcare staff and patients alike suffer when it is the nurses who get sick and are kept from going to work. Employers, however, should not force staff to get the vaccination but they should work alongside vaccination services to make certain that the entire procedure will not be complicated and will be as efficient as possible.