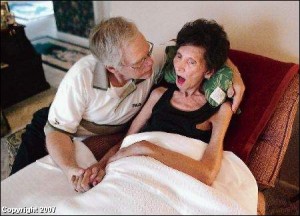 Researchers from Northwestern University have reported a major shake up n understanding the causes of this fatal condition. According to these experts, understanding the causes of this condition leads to better treatment strategies. The report was published in the online publication called Nature. With ALS, the brain and spinal cord’s nerve cells stop functioning. These cells function to promote human movement. Hence, patients with ALS disease experience paralysis and have difficulty breathing and swallowing independently later on. This condition affects approximately 350,000 people annually worldwide. About half of these individuals end up dying from the said disease.

There is not a concrete theory on how Amyotropic Lateral Sclerosis (ALS), also known as Lou Gehrig’s Disease, occurs. However, the following are theories which detail the presence of the condition:

The causes of Lou Gehrig’s diseases is not known to many. In addition to the genetic components of ts occurrence, the mechanism on how motor neurons are destroyed is not yet fully understood. There have been a number of theories on its occurrence but one main idea is the presence of environmental factors that results to injury of the nerve cells. A concrete example of this theory is the exposure to heavy metals which results to the death of some cells. Another factor known to cause this disease is the presence of viral infections.

Glutamate, a chemical responsible for transmitting messages between each nerve cell in the brain has also been suspected to play a role in the occurrence of the disease. Failure of these chemical to be removed in the spaces of the nerve cells known as synapses results to its buildup which leads to damage of nerve cells. The destruction is caused by the overflowing calcium into the motor neurons due to the buildup formed.

Exploration on the Causes

For more than two decades, Teepu Siddique, MD, a Northwestern professor of neurology, and his team have been exploring the mechanism on ow ALS diseases occur. He reported how protein mutation was involved in the damaged of nerve cells. The identification of this condition was done in 1985. Around 19 members of a family for five generations have been diagnosed with the condition.