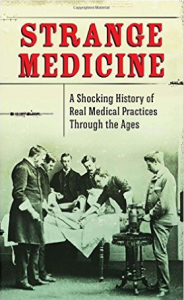 As nurses, we often say that there is a limited list of things that could surprise us. We always say that with all the insane things we experienced in the clinical area, we can consider ourselves as invincible, we feel like we’ve seen it all. But wait, think again. There are much weirder medical practices in earlier times.

Urine Was Used As An Antiseptic

Whoah, there. Though it may not have been common, evidence suggests that urine was occasionally used as an antiseptic in the Medieval Era. Henry VIII’s surgeon, Thomas Vicary, recommended that all battle wounds should be washed in urine. In 1666, the physician George Thomson recommended urine to be used on the plague. And there was even a bottled version: Essence Of Urine.

Come to think of it, it’s not as gross as it seems since urine is sterile when it leaves the body and may have even been a healthier alternative than most water (which came with no such guarantee of cleanliness).

Eye surgery with a needle

Yup, needles weren’t only used for sewing. In the Middle Ages, cataract surgery was performed with a thick needle. The procedure involved pushing the cornea to the back of the eye. The procedure then changed speedily once Islamic medicine began to influence European practices. So, instead of using a needle, a metal hypodermic syringe was inserted through the sclera and then used to extract of cataracts via suction.

If you think having hemorrhoids is painful enough, then how much more if you get to treat the hemorrhoids with hot iron? A long time ago, it was believed that if a person did not pray to St. Fiacre, who was considered as the “protector against hemorrhoids,” they would suffer from hemorrhoids. They would be sent off to the monks, who would then put a red-hot iron up the anus. Ouch, right?

There was a less painful alternative, though, but is was equally less effective: they’d send those with hemorrhoids to go and sit on St. Fiacre’s famous rock, the spot where the seventh-century Irish monk was miraculously cured of his hemorrhoids. It was for this reason that throughout the Middle Ages, hemorrhoids were called “Saint Fiacre’s illness.”

Things had changed in the 12th century as Jewish physician Moses Maimonides wrote a seven-chapter treatise on hemorrhoids calling into question the contemporary state of treatment. He prescribed a far simpler method which is a good soak in a bath.

Imagine drilling a hole in your skull. Can you even bear it?

Trepanning was believed to alleviate pressure and treat health problems localized within the head, though it was also thought to cure epilepsy, migraines, and mental disorders and were a common “fix” for more physical problems such as skull fractures. The cringe worthy procedure involved boring a small hole into the skull to expose the dura mater, the outer membrane of the brain. However, such exposure of the brain to airborne germs would often be fatal.

Trepanning as a practice has not been completely abandoned since it was performed as recently as 2000 when two men in the US used it to treat a woman suffering from chronic fatigue syndrome and depression.

Back in medieval times, doctors would refer to special calendars which contained star charts in order to aid with diagnosis. In the 1500s, the physicians of Europe were legally required to assess a patient’s horoscope before embarking on any medical interference.

According to astrology, each body part is influenced by the sun, moon, and planets, and that each star sign presides over different parts of the body. Aries, for example, pertains to the head, face, brain, and eyes; whereas Scorpio represents the reproductive system, sexual organs, bowels and excretory system. After the patient’s star chart was examined and the current position of the stars was taken into account, a person’s ailment could be predicted and a diagnosis would be made.